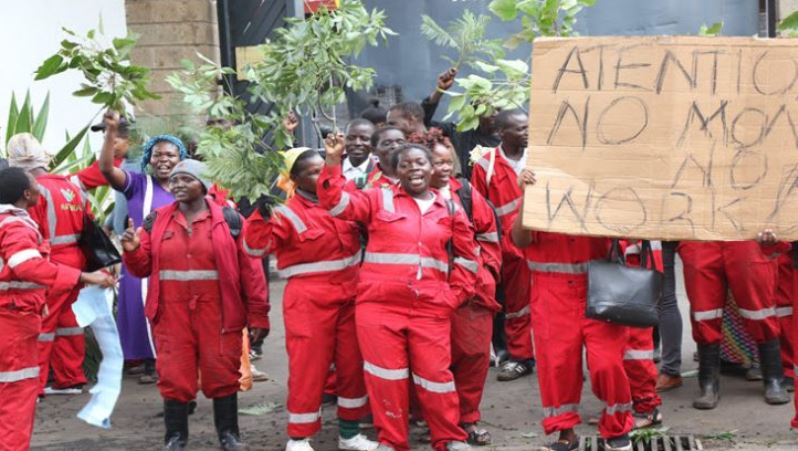 Garbage collectors in Nairobi city have downed their tools over delayed payment of their salaries.

Clad in red overalls and armed with twigs and placards, the casual laborers who work under the AGL garbage collection firm, took to the streets in large numbers and camped outside Mediamax offices on Kijabe Street.

Speaking to K24 journalists, the protestors said they have not been paid in three months.

“Our employer (AGL) is making our lives harder by the day. They have made a habit of paying us around three to four times a year. Most of us have never been paid since December, others since November.

“Since I joined AGL in August 2019, the salary payment has been inconsistent. How does AGL expect us to survive in this city with no money? I call upon Nairobi Senator Sakaja and other relevant County officials to rescue us,” said Moses Owino.

Another protester, 37-year-old Lilian Seyo lamented: “I am a mother of four. Currently, two of my children are at home for lack of school fees. I have been kicked out of my house by the landlord for failing to pay rent for the past three months; to my luck, a relative has taken me in together with my children. I have so many pending bills and I don’t even know my fate.”

AGL, whose offices are located on Lagos Road, are said to have hired 150 workers without issuing contracts.

The firm’s senior supervisor, Alex Maleche, declined to speak about the matter. While Nairobi Environment Minister Larry Wambua distanced himself from the workers’ salary issues, saying that only AGL can settle the arrears.

“The workers are not part of Nairobi County’s employees and so we have no relationship with them. They are engaged by a contractor so they should direct their complaints to AGL. Also, even if they were county employees, it is not the responsibility of the Environment Department to make payments. We leave that to the finance section,” said Wambua.

Everything Trending This Friday < Previous
Why Speaker Muturi Has Banned Bodyguards in Parliament Next >
Recommended stories you may like: