My Story: Living With Cancer and HIV Won’t Put Me Down 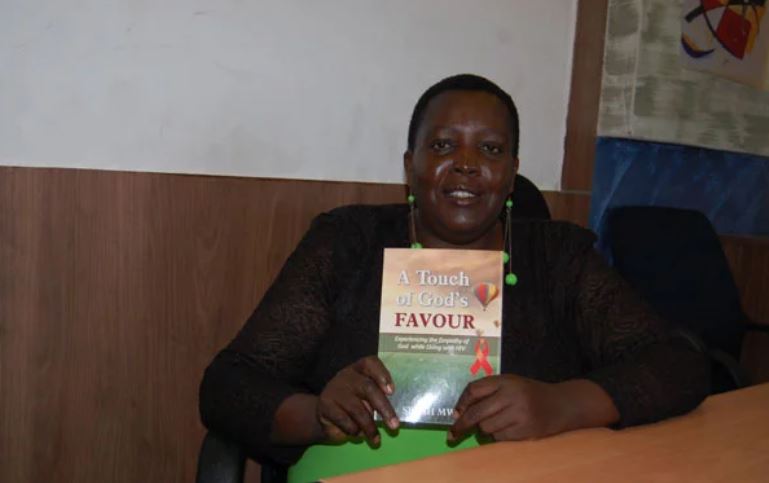 Serah Mwangi is a 46-year-old high school teacher who has been fighting a bruising battle with cancer and also lives with HIV.

The English Literature teacher contracted HIV 22 years ago and is determined to use her story to spread hope.

“I discovered I had contracted HIV after the demise of my husband in 1997. That was the time when stigma was real. Shaking hands with people they thought you would infect them.

“That time there were no ARVs. I knew that I was going to die. During the mass I started visualising my coffin being wheeled to the front and even the funeral song that would accompany the procession would be, Pokea moyo wangu eeh Mungu wangu…. (Receive my soul O my God)

“I kept praying to God that my daughter grows up to Class Three.

“I completed my TB treatment of 60 injections and drugs after eight months. It was not easy. The injections were painful and every day when I woke up and remembered that I was going for one more, my heart shook. I was not going to give up though.

The pain of discipline is less than the pain of regret. They injected my backside until there was no more space. The next casualty was my thighs. Sitting down was a problem. I started gaining weight.

“When I went to church the coffin that I had envisioned earlier being wheeled near the altar turned into procession to partake the Holy Communion. The song that was to be sung during my funeral became a song of hope.

“Mid 1999, I develop an opportunistic infection on my backside. It was removed. I was to make subsequent visits for dressing the wound. I opted to visit a nearby clinic.

“The wound got infected and I had succumbed to bacterial meningitis which I was treated for.

“My husband was a foreigner he didn’t have insurance benefits. He left Sh60,000 which I bought drugs for one month. When I got employed, I started saving and with my first loan of Sh30,000 I bought a batch of ARVs.

“2005 brought the era of free ARVs but the stigma was still there. Going to the Voluntary Counselling and Testing (VCT) Centre at Nakuru Provincial General Hospital to collect drugs was a physical and mental torture. I would go creeping in like a cockroach as I feared meeting someone I know and become a recipe for gossip. I had to be very cautious because I didn’t want the information to leak out and reach my daughter.

“I thought I was fully recovered and stopped going for them. In 2007, I went to collect drugs without fear. I was told I had to take another test. For the first time I heard the term viral load test. I took a test to measure the number of HIV particles (copies) in a millilitre of blood. The results revealed that my viral load was 1 million copies of viral load and a CD4 count of 37.

“This meant I was literally like a walking corpse. A healthy immune system normally has a CD4 count ranging from 500 to 1600 cells per cubic millimeter of blood cell. They changed the drugs and put me in the second line medication. One of the drugs was causing terrible nausea and vomiting.

“I was in charge of the music club. I gathered the courage to go to Eldoret for the music festivals. The journey was not interesting. I puked all the way and I soiled the Matatu.

“While in Eldoret, I called a friend who referred me to AMPATH clinic. I got a new dose of ARVs and the situation changed.

“However, my CD4 count was going down. I discovered the supplement diet I was using was interfering with the ARVs in my body.

“While attending the clinic, a Prof Mammlin told me not to worry as I would like to see my grandchildren Those were the words I wanted to hear.

“Prof Mammlin took a blood sample and sent it to US. I was resistant to many second line drugs except alluvia which had side effects. I used to teach when I was seated. I feared to unleash and I would be a recipe for gossip.

“The specimen from US came back. The results revealed that I was resistant to all the drugs and I was put on the third line drugs. More tests were done and HIV particles could not be detected. Reaching an undetectable viral load is key goal in HIV treatment.

“Being a Catholic I had a thanksgiving mass in my house, I felt like I must talk loud and that is when I started writing my book titled A touch of God’s Favour.

“But if it was going to get the rid of that pain, I yielded. The results came positive of skin cancer. However, the surgeon assured me the cancer would not take me down very fast. I went to Kenyatta National Hospital for radiotherapy.

“I completed the 27 sessions. I felt the cancer is gone. In 2013, the place where the labia was cut started smelling and was operated again.

“I came home with a catheter. When my daughter saw the catheter she was not happy. She had just completed Form Four. The results came and this time there were no cancer cells. I celebrated.

“In 2017 the problem recurred on these other labia on my left. I started bleeding and I used to have a lot of pains at night and nose bleeding. I was operated and went for chemotherapy. However, a doctor at a private clinic in Nakuru told me to sit on saline water and the wound dried up and I escaped surgery. I was fighting HIV and cancer of the vulva. It was a tough battle.

“I don’t blame my late husband for infecting me with HIV. He gave me a daughter. The source of hope and joy.

“The HIV treatment has drained me financially and emotionally. During my days an early dose of ARVs was Sh250,000 per month. I feared to invest because I thought I will die soon. I was taking care of my medical expenses and my daughter’s education. I have spent more than Sh1million.

“I hope to be declared free of cancer after five years. The fact that the viral load is undetectable, it has given me a lot of courage to speak out.

“I want to impact on people positively. I faced stigma from very close relatives. Many think by going through chemotherapy you will come out as a corpse.

“My current working environment is empathetic right from the Principal to my colleagues. The previous station was kind of a hell on earth. My former Principal was telling teachers to be careful while dealing with me. I would be given heavy duties working at night.

“People count their blessings but for me there is no greatest blessing than seeing my 24-year-old daughter grow up and become a mother. She is pregnant and will soon give me a grandchild. She was not infected.

“The HIV journey has brought me closer to God. I now go to church and I enjoy. My life resolution is to be dedicated to my calling and serving God.

“I would like to be remembered as a person who touched the lives of many people. It is not what you go with but what you leave behind long after you have joined your maker that matters.

Njugush: My Biggest Regret is Not Loving Myself More < Previous
Migori Woman Poisons Daughter, 3, Attempts Suicide Next >
Recommended stories you may like: