Raila to Uhuru: Give Peter Kenneth a Job 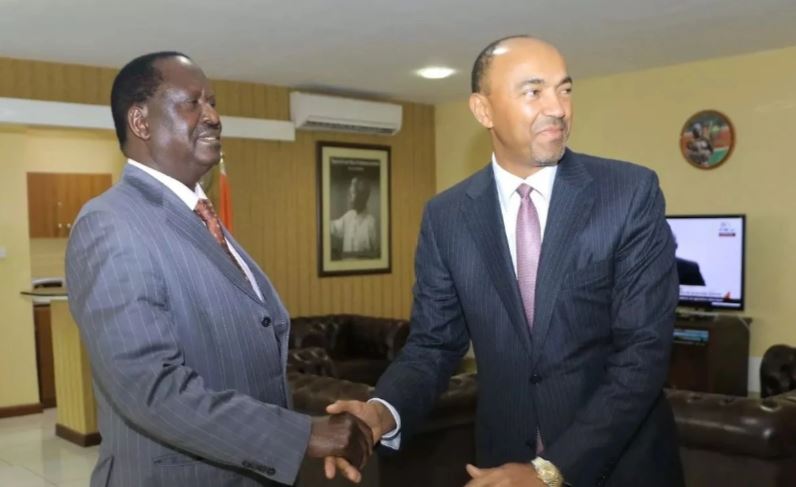 Former Prime Minister Raila has given a glowing endorsement of Peter Kenneth to President Uhuru, asking him to consider the former Gatanga MP for a job in the government.

Speaking at the funeral of Kenneth’s mother in Gatanga, Murang’a County on Thursday, Raila described the former presidential candidate as a gentleman with vast experience.

“We are here to condole with you for losing Mama Rahab, who brought up this man ‘Muthongo wa Gatanga’ (Kenneth’s nickname) into the gentleman he is…. His ways, the way he handles his business and the way he presents himself you can see he is a gentleman. So Mr. President, this man needs to be given a job in government,” said Odinga as the crowd burst into applause.

The Opposition leader also noted one of the things he has in common with Peter Kenneth. “He (Kenneth) has worked for the government before, in the banking and insurance sectors. He also loves football and that is something we have in common…”

Raila also used the opportunity to call on all leaders to support the government’s war on corruption and quest to unite the country.

“We want to work together for the sake of the country. The country cannot move forward if we don’t unite and support this fight against corruption.”There is no need of shifting blame, what we want to see is justice being served and the truth known,” said Odinga.

Top Nairobi Lawyer in the Dock for Beating Up Wife < Previous
Motorist Who Beat Up Traffic Cop Had Caused An Accident – Police Next >
Recommended stories you may like: