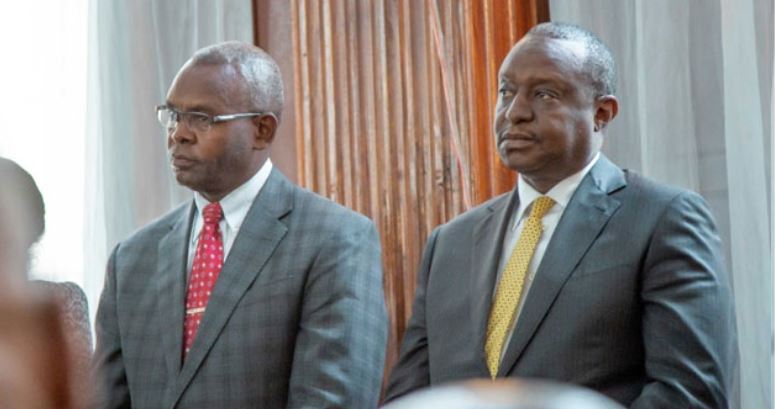 National Treasury Cabinet Secretary Henry Rotich and Principal Secretary Kamau Thugge were Tuesday ordered to deposit Sh15 million cash bail or a bond of Sh50 million to secure their freedom after being charged over the multi-billion Arror & Kimwarer dams scandal.

The top government officials and other accused persons including Susan Jemtai Koech ( East African Community PS) and David Kipchumba Kimosop (Former Managing Director KVDA) are accused of conspiring to defraud the public millions of shillings among other charges. They denied the corruption charges.

While delivering a ruling on their bail application, Milimani Chief Magistrate Douglas Ogoti also ordered Rotich and Thugge to stay out of their offices during the entire period of their case, terming them as scenes of crime.

“The places of work of the accused persons are considered scenes of crime and they should keep away. If there is any need to visit their places of work that should be done in the presence of the investigating officer,” said Ogoti on Tuesday evening.

The CS and the PS were also warned against tampering with evidence in any form or approaching witnesses in the case.

The 28 accused persons are facing charges ranging from abuse of office, corruption, conferring a benefit to themselves, fraudulent acquisition of public property, wilful neglect to perform official duty, wilful failure to comply with applicable procedures, among others.

Only 14 suspects appeared in Court Tuesday. Those who missed the court appearance are required to present themselves to the DCI on Wednesday, before warrants of arrest are issued.

A pre-trial date will be set on August 8, 2019 when the matter will come up in court to ascertain compliance.

All The Trending Pics This Wednesday < Previous
How Students Plotted to Poison Classmate as Punishment for Snatching Boyfriend Next >
Recommended stories you may like: