Donald Kipkorir to Ahmednasir Abdullahi: ”Why Did You Betray Me?” 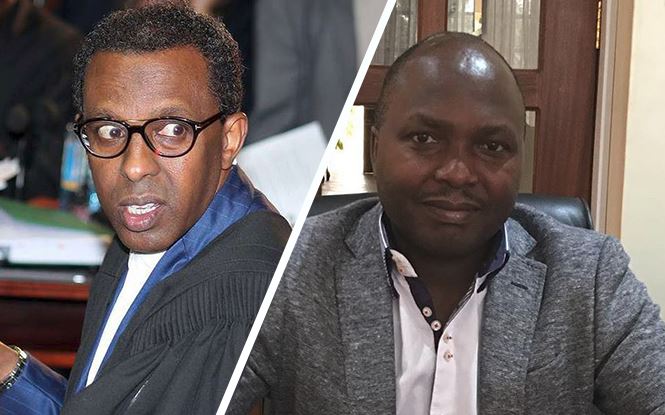 He faced an uphill battle competing against seasoned lawyer Tom Ojienda who sought to defend his seat.

Macharia garnered 2,738 against Ojienda’s 2,545 votes, in the election carried out across the country.

In the final days of campaigns, lawyer Ahmednasir Abdullahi had come out to support Ojienda, terming him the most qualified for the job. What Kenyans did not know was that just a few months ago, the Grand Mullah was plotting how to get rid of Ojienda.

The beans were spilled by fellow learned friend Donald Kipkorir, who wrote an open letter addressed to Ahmednasir, wondering why he betrayed him. Apparently, they had decided together that they won’t be voting for Ojienda.

In the Facebook letter, Kipkorir demanded answers from his ‘friend’, wondering whether he was bought.

Dear Ahmednasir Abdullahi, You Betrayed Me on JSC!

Sometimes last year, I had a meeting with my friend Ahmednasir Abdullahi wherein we agreed that we have to replace Prof. Tom Ojienda as the LSK male representative to Judicial Service Commission. My agreement with him was that if we don’t get a worthy candidate, he was going to run.

Two weeks later, Macharia Njeru came to see me in my office and asked for my advise on whether he should run. Having known Macharia for over 25 years, I could vouchsafe his integrity, Intelligence and Patriotism. I know Macharia can’t be bought and can’t buy loyalty, just like me. I told I will support him without equivocation if Ahmednasir will not run. Ahmednasir decided not to run.

Tom Ojienda is my Classmate & Friend. But I thought his Five Year tenure was sufficient. JSC is not a political office. If the CJ can serve as CJ for Four Years only and be content, why should one serve in JSC for more than Five Years?

However, I was surprised when I saw Ahmednasir cheerleading Tom Ojienda’s campaign alongside my other friend Nelson Havi who has no time for Ahmednasir.

What has disturbed me since and which I want Ahmednasir to answer me is: Why did he renege on our deal? Was he bought? How much was he paid? Why did he turn his back on Macharia? Is he corruptible? Is it 2022 Politics? What made him serve under Nelson Havi? Did he finally capitulate to Havi?

My soul is disturbed. My spirit is restless.

I want an answer.

Ahmednasir on his part refused to give his reasons, instead wondering how a ‘man in his 50s had the mind of a 6-year old’.

HOW DO I ANSWER A MAN IN HIS 50s WITH THE MIND OF A SIX YEAR OLD BABY? @DonaldBKipkorir https://t.co/ey4zBBvu16

KRA Demands Sh14 Billion from Sportpesa < Previous
Has CS Magoha Ordered Uniforms for University Student Next >
Recommended stories you may like: