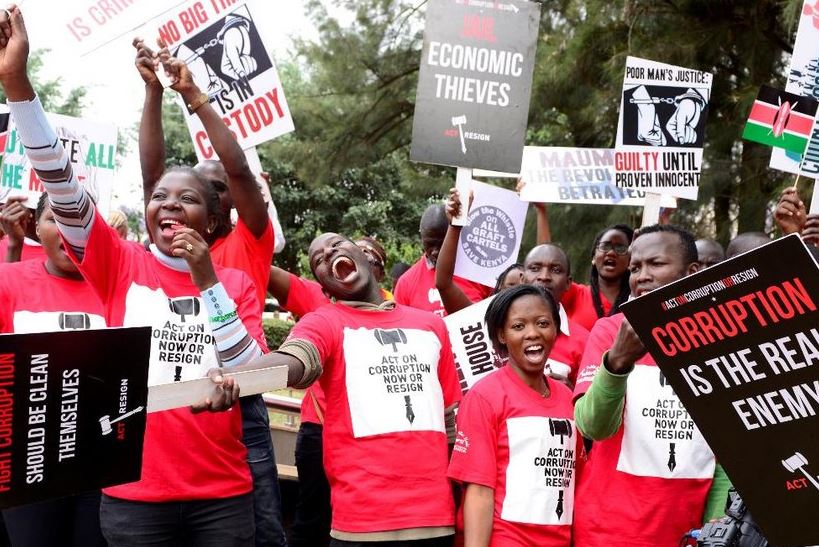 The Kenya Patriotic Movement (KEPAM) is set to take to the streets later this month to protest against rampant corruption within high circles of the government.

“We can’t sit and watch as our Country continues to be mutilated by known thieves,” said President of KEPAM, Joseph Lister Nyaringo.

The lobbyist said the demonstration dubbed “Redeem Kenya Demo” will be held on March 30 across the country.

Nyaringo, who is the coordinator of the initiative, said the demonstration will not spare any leader or chief executive officer who has been adversely mentioned by relevant agencies of being involved in graft.

“We are planning demonstrations in all parts of the country to decry the numerous corruption scandals currently bedeviling the country,” said Nyaringo, adding: “Kenyans from all walks of life at home and abroad through the Redeem Kenya Demo are prepared to eject the looters from office. After all, it’s the taxpayers’ money that affords them the luxury in those offices.”

Maurice Odhiambo, who is organizing the demo in Western Kenya said the country is not a sole proprietorship but a nation of 45 million who claim its shareholding.

“If you are an MP, Senator, Governor, Judicial officer and you’ve been adversely mentioned of abetting corruption let them be prepared to see the wrath of wananchi through the revolution that’s coming,” Odhiambo said.

The lobby group said it intends to pursue all legal avenues to recover grabbed public properties and funds stashed in offshore accounts by the corrupt.

KEPAM is also appealing to Kenya’s foreign partners especially the US, UK and European Union (EU) nations to come to the country’s rescue in the fight against graft.

Robert Ndede, an official of KEPAM in New York questioned why the US government has not implemented tough sanctions including freezing of offshore accounts, blocking international criminal deals and travel bans on Kenyan government officials implicated in looting.

“Our country cannot continue celebrating the men and women who loot with impunity and after every 5 years, they use the loot to lure voters to elect them,” said Dr Tom Mogondo of Kansas City, Missouri.

“Kenyans at home and abroad are now in one accord… The poor, students, farmers, touts, the jobless etc are the majority while the looters are the minority. We have the capacity to defeat this minority so that we can restore our nation and put it on the right hands,” said Ali Ali from Britain.

The KEPAM officials are appealing to “Kenyans from all parts of the country who believe in social justice, fairness, equity and equality to come out in large numbers so that together, we can send the looters home under the Redeem Kenya Demo.”

The Trending Images in Nairobi Today < Previous
RAW VIDEO: Boniface Mwangi Confronts Police Officers For Harassing Man Over “Military” T-shirt Next >
Recommended stories you may like: