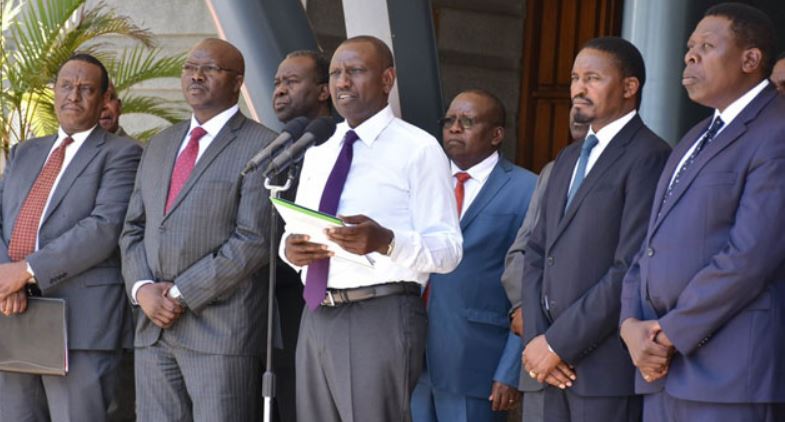 The government is in control of the prevailing drought situation in sections of the country, Deputy President William Ruto has said.

In a presser on Monday morning, DP Ruto said the government has disbursed Ksh2 billion for the supply of food and water to about 1.1 million Kenyans affected by drought and food scarcity.

“This morning, the government of Kenya has approved Ksh. 2 billion to be spent within this week in water tracking, making sure that boreholes and waterpumps are working,” said Ruto.

The second in command noted that this year’s drought situation has improved compared to previous years.

“It is important to state that the situation we have this year is better than the situation we had last year and the year before,” said Dr Ruto, adding, “There should be no cause for alarm at the moment, the government has put in place both at the county and national level interventions to manage the current drought. We will work together with partners such as the United Nations agency and all other friendly institutions to ensure we don’t have any casualties as a result of this drought.”

According to the DP, a situation assessment report by the government shows that a total of 865 persons have been severely affected by the drought while 1.1 million others are being affected “generally.”

Ruto said the new funding to be channelled through the Ministries of Devolution and Agriculture, is in addition to Sh12.4 billion set to be disbursed through the Ministry of Labour and Social Protection via cash transfers to 1.3 million vulnerable persons including the elderly.

“As part of ensuring there is resources around the country for people to buy food, all beneficiaries under our cash transfer program, the vulnerable old people, people with disability and orphans, the government has again released Ksh.12.4 billion to 1.2 million beneficiaries that will put them in position to be able to buy food, especially those in areas that are affected by the drought.”

Ruto said the government had put measures in place to strengthen distribution of food in counties facing shortages assuring that Kenya’s food security situation was stable.

He said the drought situation in the country had been triggered by poor performance of short rains.

Resign If You Can’t Handle Handshake, ODM MPs to DP Ruto < Previous
The Top Stories on the Internet Today (Wednesday March 20) Next >
Recommended stories you may like: