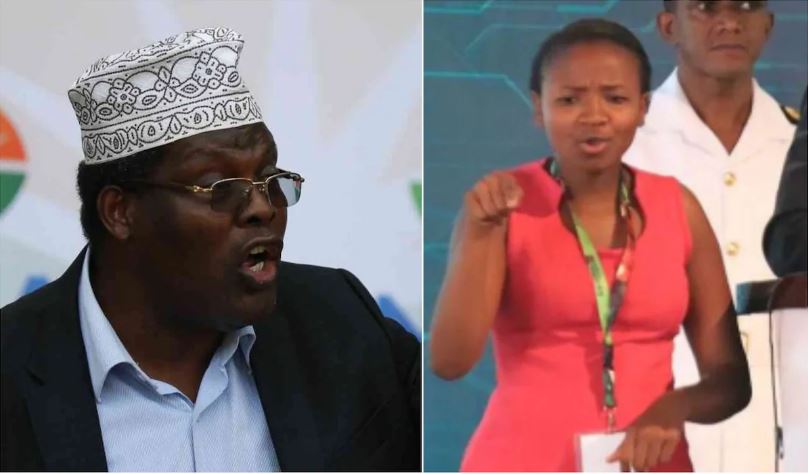 One cannot simply win an argument against Miguna Miguna! That must be the main takeaway some Kenyans on Twitter will remember after engaging the firebrand lawyer in a debate over sign language interpretation.

The deported ‘General’ once again found himself in the all-too-familiar territory of negative backlash after he questioned the authenticity of the sign language interpreter during President Uhuru’s speech at the Devolution Conference in Kirinyaga.

“Is that legitimate “sign language” the young woman to @UKenyatta’s right is using or those are freshly invented despotic gestures intended to mock Kenyans?” Miguan posed.

Is that legitimate “sign language” the young woman to @UKenyatta‘s right is using or those are freshly invented despotic gestures intended to mock Kenyans?

As expected, his remarks opened a portal for Kenyans on Twitter (KOT) to slate him or even perhaps correct him on the laws of sign language interpretation. They shouldn’t have.

The Kenyan/Canadian lawyer proved his barrister credentials as he took on his critics one by one.

One Twitter user tried to correct Miguna Miguna, writing: “That lady is using Kenyan Sign Language which incorporates facial expressions, hand & body movements. She is doing it 99% of how it should be.”

But Miguna was quick to respond: “The expression “Kenyan Sign Language” is not a known language or subject in Kenya.”

Another KOT innocently quipped: “I don’t think she would sit there for the soul purpose of mocking Kenyans.”

But Miguna turned the quip into a grammar lesson, writing: “She was clearly STANDING; not sitting. And the word you were looking for is “S-O-L-E” – not “s-o-u-l-.” The latter is purportedly inside your dirty gut!”

Below are some screengrabs of Miguna Miguna’s amusing comebacks. 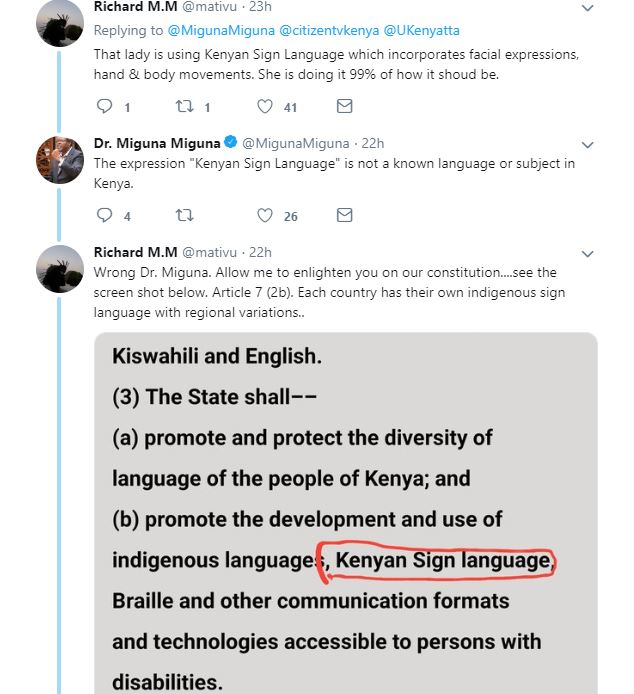 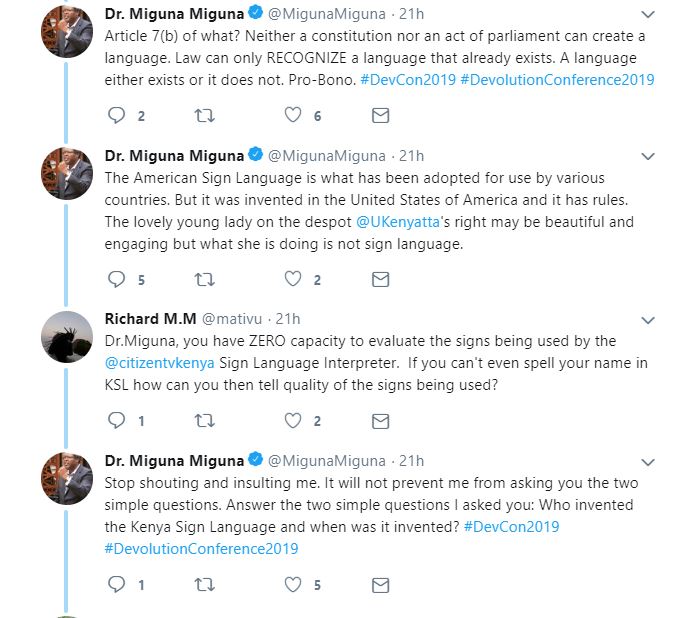 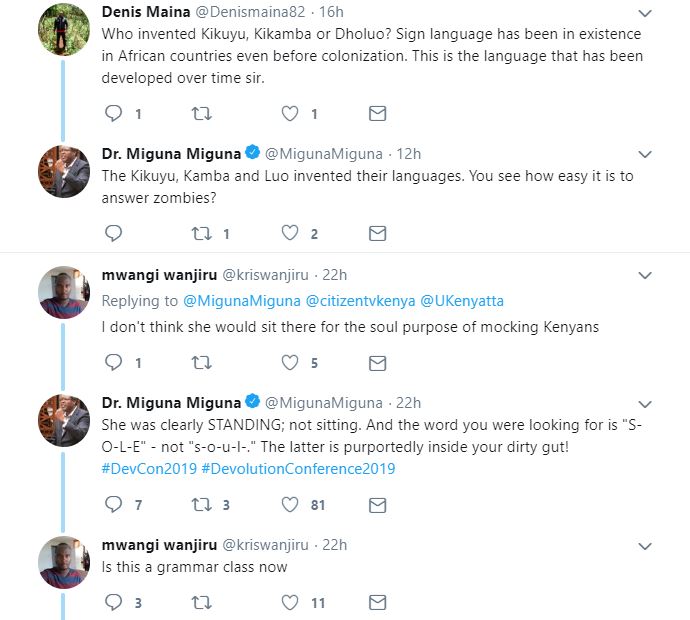 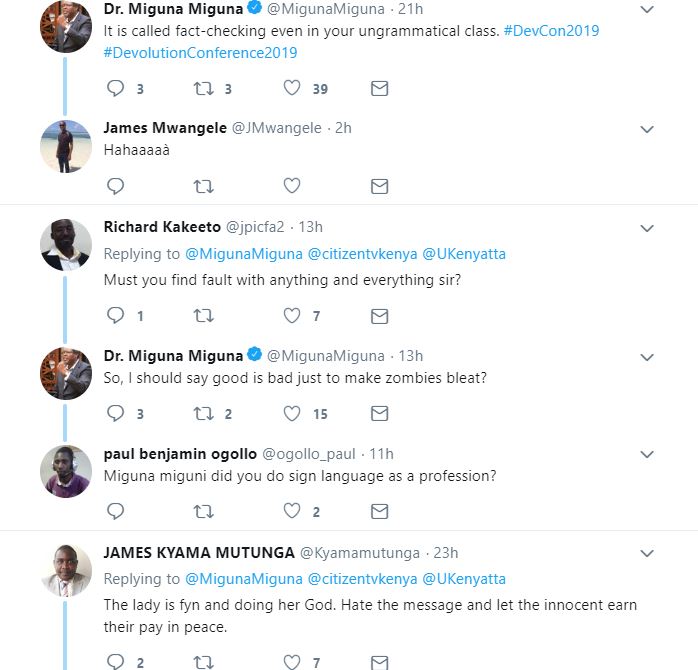 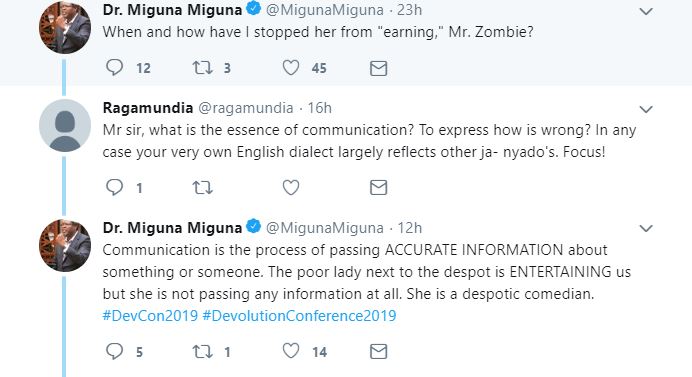 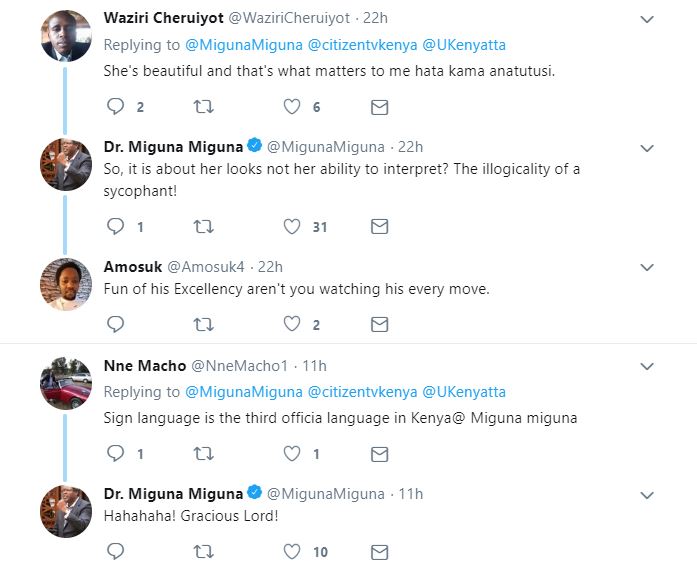 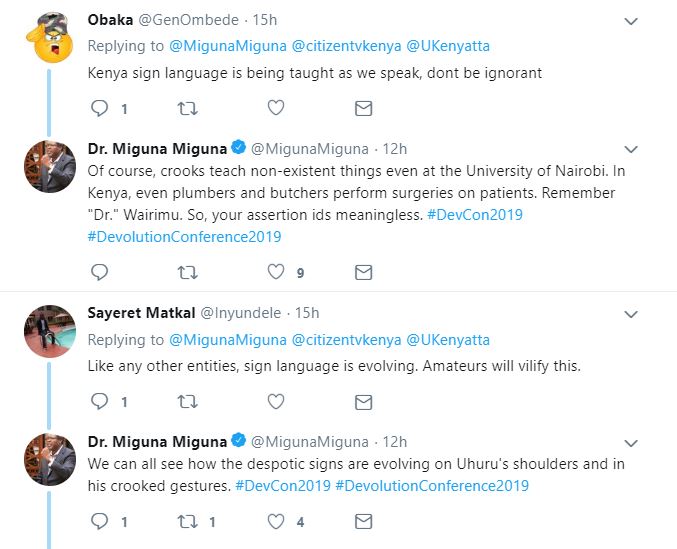 The Trending Images in Nairobi This Thursday < Previous
4 Cases Where President Uhuru Targeted Kalenjins in War on Graft, Oscar Sudi Reveals Next >
Recommended stories you may like: