A picture of two rhinos getting their freak on at the Nairobi National Park has elicited hilarious reactions from Kenyans on Twitter.

The photo that has been doing the rounds on social media space for a minute now is credited to the Caters News Agency. It shows two black rhinos doing the nasty, with the Nairobi skyline in the background.

The Kenya Wildlife Service on Wednesday shared the picture through its official Twitter handle, @kwskenya, and accompanied it with a hilarious caption.

“What’s a Wednesday afternoon timeline without a little romp? Talk about Sex and the City!?  #DiscoverNairobiNationalPark.” 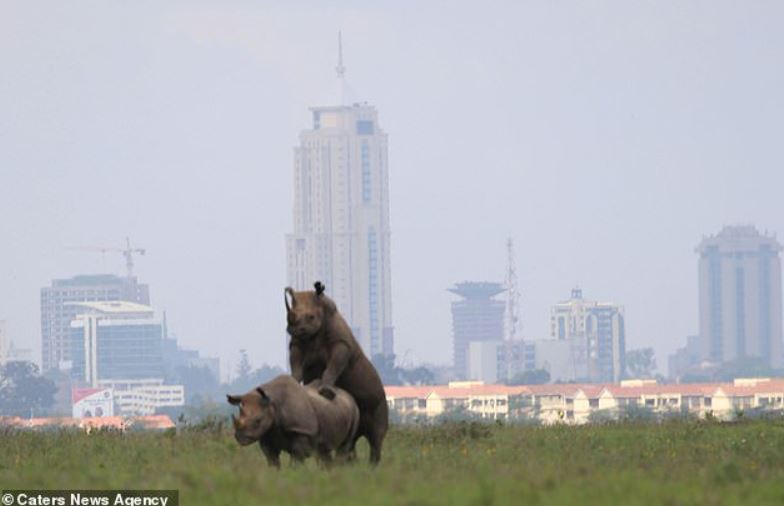 As you would expect, the ever-excitable Kenyans on Twitter had something to say about the post. Some Tweeps, like David Ndii, sarcastically called on Kenya’s moral policeman Ezekiel Mutua to act.

“Shame on you at @kwskenya Kenya is a conservative society. @EzekielMutua what say you?,” wrote Ndii.

Another noted, “Rhino clearly towering above the Nairobi skyline.”

Here are those tweets:

What’s a Wednesday afternoon timeline without a little romp? Talk about Sex and the City! ? #DiscoverNairobiNationalPark

Shame on you at @kwskenya Kenya is a conservative society. @EzekielMutua what say you? https://t.co/by0zBScD1B

What is there to be Ashamed of??sex??boss let us stop pretending about sex and make it an open discussion!its folks like u who deny children sex education in school in the name of Kenya being a “conservative “ society-whatever that means

You heard of sarcasm?

I hope they are not both male.. otherwise they will need to be counselled – like the two lions ?

I mean these two – for those who might be wondering what am taking about pic.twitter.com/QDT5wWVWCS

Get them a room .Mutua will be livid ???

This is what I’ll be doing with my new bae ??

Na huo uzito wote, do they really enjoy that game!!!

With Rhino populations dwindling, this is exactly what we need to see! ?

Crazy Kenyans: #BarclaysBankChallenge Takes Over Following Fake Billions Seizure < Previous
The Top Stories on the Internet Today (Friday March 22) Next >
Recommended stories you may like: