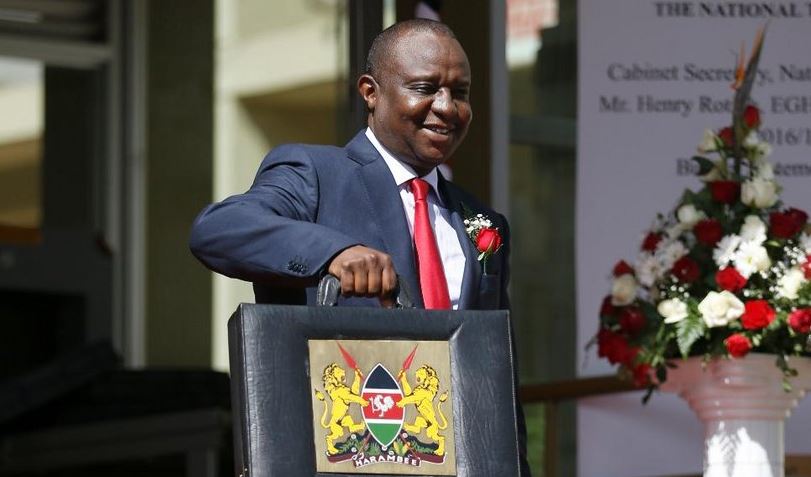 Cabinet Secretary Henry Rotich has finally broken his silence on the dams scandal that is threatening to end his six-year tenure at the helm of the country’s National Treasury.

In a rare interview, CS Rotich sat down with Sunday Nation and spoke on scandals the Eurobond saga, the national debt and his personal life.

He maintains that his ministry followed the right procedure in releasing money for the dams. My conscience is clear, he says.

Below are the interview excerpts.

The role of the National Treasury is clear – to review and negotiate the financing terms to ensure it is within the government borrowing policy. The utilisation of borrowed funds is done upon request from implementing ministries and agencies and in accordance with the public financial management law.

Treasury cannot wake up one day in the morning and start paying for things they have not been asked to pay. Advance payment is a procedure in virtually all commercial agreements and it is provided for in the Public Procurement and Disposal Act, 2015. It allows the contractor to mobilise and commence work and once the work commences the advance payment is recovered from subsequent interim payment certificates raised by the contractor.

How was the Bill of Quantities for the dams arrived at yet the project had not been designed?

It is important to note that the model adopted for these dams by the implementing agency is design-build Engineer Procure Construct (EPC) plus financing. The commercial contract has a summary of Bill of Quantities, which presumably would not vary with detailed designs in an EPC contract. Details on how they were arrived at can be obtained from the implementing agency, Kerio Valley Development Authority, and the line ministry.

Treasury released money to compensate locals whose land would be affected, but the Kenya Forest Service says it was never asked to degazette sections of the forest where the dams would be built. How could this happen?

Again, the details on compensation and acquisition of dam site is the business of the implementing agency (KVDA) and the line ministry. What I know is that the Land Act requires the CS in charge of a particular function to make an application to the National Land Commission (NLC) for compulsory acquisition of land for public use and, thereafter, the NLC will go through its process to degazette the land.

There have been claims linking you to a company known as Hekiro Investment Ltd that has Italian directors and was involved in the controversial dams. Are you in any way linked to this company?

Not at all. If you are interested in the companies that I own, you can check with the company registry.

The government seems to be thoughtlessly going headlong into projects before abandoning them years later and billions down the drain. The schools laptop project is one example. How much thought goes into some of these mega projects?

I believe every one of us knows that we have a huge infrastructure deficit that we must close in order to exploit the full potential of our economy. The project that you refer to is a noble idea to transform our learning practices at an early age. In our case, we may have experienced implementation challenges but I believe lessons have been learnt.

Going forward, we have come up with a unit at the National Treasury for Public Investment management. This will ensure effective coordination in the project cycle.

On a scale of 1-10 (with 1 being the lowest), how would you rate the Jubilee administration handling of the economy?

8.5, because there is always room for improvement. The results are there for everyone to see. We have been rated very well by our partners and rating agencies. Nevertheless, we continue to face challenges like other countries.

Kenya’s foreign debt keeps rising and financial experts have warned of a financial meltdown similar to what happened in Greece. Is this fact or fiction?

Are you confident that the Eurobond funds were used for what they were intended?

Of course, yes. All the funds can be accounted for through the line ministries. Indeed, a reputable firm has completed an independent audit and the results submitted to the National Assembly. The Auditor General has also completed the special audit on the Eurobond and it will soon be tabled in the National Assembly and Kenyans will know the truth.

What motivates you to wake up early to go to work?

Well, it is a sacrifice that has to be made given the nature of the work. Look, I bet if you were to be in this office, you will do exactly that; wake up early and leave late. Whether that is enjoyable, I leave that for you to judge. But on a serious note, as long as Kenyans are happy with the performance of the economy, that makes our work at the National Treasury enjoyable.

How do you unwind after a hard day’s work?

I wish I could but once in a while I catch up with friends and meet new ones. More recently, I have started taking exercises seriously; so I do some walking and running in Karura Forest.

Your biggest achievement since you became Treasury Cabinet Secretary.

Keeping the economy stable while at the same time achieving significant progress in infrastructure and social investment is not easy. I could add another: Navigating Kenya to access international capital market. The list is long.

What’s your biggest regret so far?

I wish the media could do more to sell Kenya’s progress.

What do you consider as the biggest misconception Kenyans have about you?

I don’t know of any.

Have you considered quitting as CS?

This question is not necessary.

Hilarious Meme Compilation (Monday March 4) < Previous
The Trending Images in Nairobi Today Next >
Recommended stories you may like: