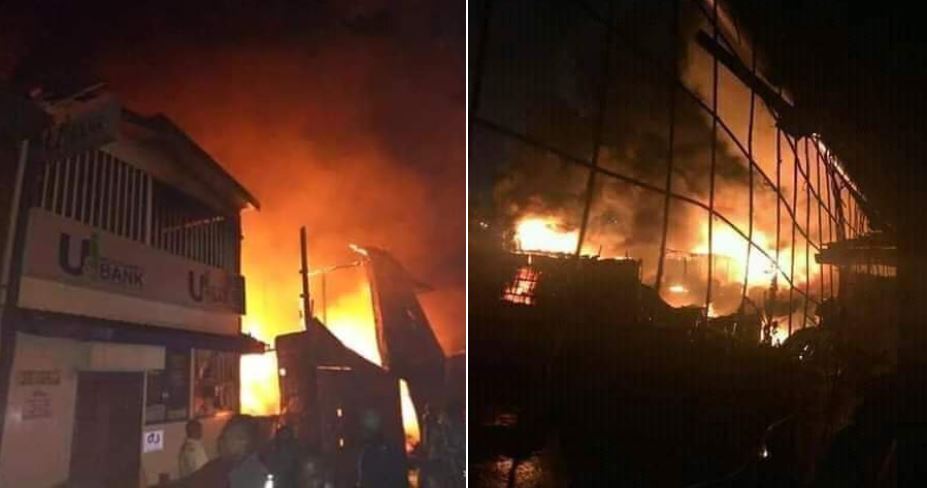 The perennial inferno at the Gikomba Market in Nairobi has struck again.

In what has become an all too familiar pattern, the fire broke out in the dead of the night on Wednesday. Reports indicate that Nairobi firefighters arrived on time and contained the fire before it spread to other parts of the popular market space.

Several business stalls were, however, razed down by the inferno. No injuries had been reported by the time of publishing this article.

The latest inferno at Gikomba comes just seven months after another fire claimed the lives of 17 people and left about 70 others with serious burn injuries. Property worth millions of shillings was also destroyed.

In October 2017, another fire broke out in the market, with President Uhuru Kenyatta calling for investigations to establish the cause of the tragedy that occurred barely one month after a similar inferno in another section of the market.

The frequent occurrence of Gikomba fires has raised eyebrows, and this latest one is no exception.

Kenyans on Twitter have come out in numbers to express their shock at the Wednesday inferno. Most argue that underhand dealings associated with land grabbing are the cause of the persistent fire outbreaks.

Let no one lie to you about Gikomba fires being an accident.
Just check the response of fire fighters and the proximity of fire station given there’s zero traffic at night!
Someone big at City Hall is calling the shots!
The market must be relocated!#GikombaFire

Why is it that immediately the businesses are full of stock that’s when the fire breaks, this Gikomba fire ? is stagemanaged #GikombaFire pic.twitter.com/Cz4mqq2ccG

Dear Sons and daughters of lesser gods hustling in Gikomba market, these crooks are determined to frustrate your progress, grab your spaces and expand their illegal territory. You Should stand your ground and fight back or consider relocating your hustles #Gikombafire

should Gikomba burn every now & then? ??

And who is always behind these fires? ??

feeling so sad for family, friends & everyone else who depend on the market wholly for their livelihood.??#GikombaFire pic.twitter.com/6zL69NmTFN

Sad news again inside our big market tonight #GikombaFire
First step in interrogating this cause and permanently finding its solution is take away the ownership of all stalls from their owners to either county government or NG @MikeSonko @FredMatiangi @Nairobi_News pic.twitter.com/xDDoiAs9J9

Nobody is prosecuted.
Keeps repeating itself.
It won’t be the last.
Its the poor who suffer!#GikombaFire pic.twitter.com/jqjMODMfKV

There’s a big construction of storey building going on at Kariko few meters from Riverside Roundabout we want to know the Owner. This might be the same grabbers burning Gikomba yearly. #GikombaFire

A parent somewhere will not pay school fees/ meals/rent for you to drive the latest car, wear the latest designs and fill your bank accounts with huge chunks of money. May you never have peace!! #GikombaFire pic.twitter.com/eKrZDB1R5C

Why is this Gikomba fire coming too obvious. I feel sorry for everyone who gets daily bread from there ?? #GikombaFire

So every Year Gikomba must experience this? But why? Government should investigate this forreal #Gikombafire

Perpetrators of the Gikomba fire ought to be tried, majority of families earn their livelihoods from the market. It is unfortunate. #GikombaFire

This must be a game being played behind our backs as Kenyans, most likely we hustling Kenyans. Gikomba can’t be ever an inferno periodically. Each year ati kuna moto ? ? ? this is a game and @UKenyatta
Order investigations we need answers now!!!!!! #GikombaFire pic.twitter.com/QyiXIdOR5I

Nairobbery: Daring Thief Attempts to Steal from Vehicle at DCI Headquarters < Previous
The Top Stories on the Internet Today (Friday February 8) Next >
Recommended stories you may like: