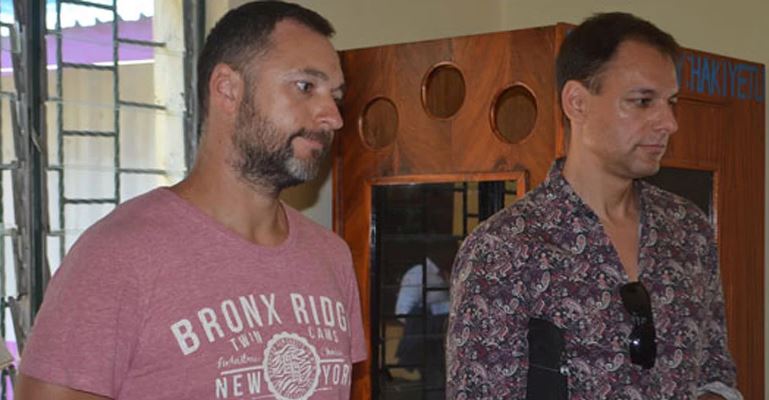 A German and a Ukrainian have been arraigned in Court on allegations of stripping naked and taking pictures of a middle-aged woman against her will.

Mr Zerbin Sascha Marius Waldermar from Germany and Mr Wectabe Shestavetskyi were on Thursday, January 24 charged at the Shanzu Law Courts, where they pleaded not guilty.

The Court heard that the two foreigners stripped the complainant, YMN, naked and forcefully took pictures and videos of her on January 17 this year in Mtwapa area, Kilifi County.

In court documents, the woman claims she met the German national Mr Marius on an online dating website earlier this year. The two physically met for the first time on January 17 in a villa in Mtwapa.

“We spent the whole day swimming. In the evening, we proceeded to the apartment, (where she found Mr Shestavetskyi sitting). They brought alcoholic drinks and food,” she said in her report to the police.

YMN’s affidavit in court indicates that the men forcefully undressed her and threw her clothes outside the apartment. As Mr Marius struggled to wrestle her down, Mr Shestavetskyi took nude photos and videos of her.

The woman, however, managed to overpower the men and grab the phone before taking off with a bed sheet wrapped around her body.

She reported the incident at a Mtwapa police post on the same day.

In their defense, the suspects said YMN was the girlfriend of one of them – Marius.

The suspects were granted Sh100,000 cash bail. The case will be mentioned on Friday.

Dennis Itumbi Defends DP Ruto after KTN did this ‘Outright Malice’ < Previous
All The Trending Pics this Last Friday of Njaanuary Next >
Recommended stories you may like: