Three Kenyan Americans with Links to ISIS Arrested in Michigan 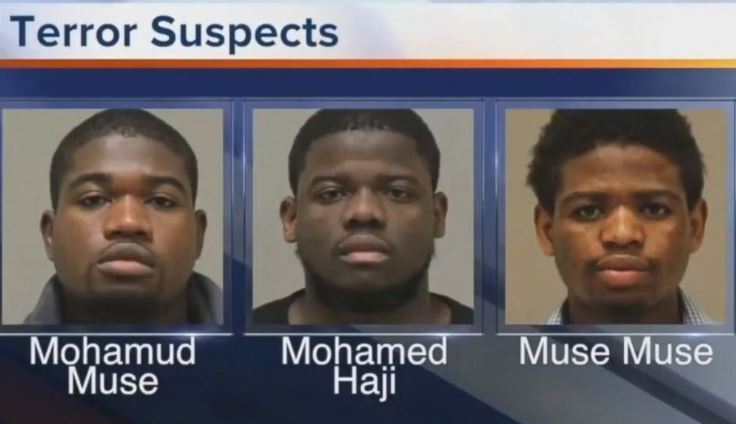 A trio of Kenyan-born terror suspects was on Tuesday arrested in Michigan, US for having links to the Islamic State of Iraq and al-Sham (ISIS).

Mohamud Abdikadir Muse, 23, is the brother of Muse Muse. Haji, 26, is a cousin to the brothers.

Mr Muse Abdikadir Muse, 20, was arrested on Monday while on transit to Somalia.

“He was checking in for a flight on his way to Mogadishu, Somalia when he was arrested,” a statement by the FBI released on Tuesday stated.

The US Department of Justice said the two co-conspirators had assisted Muse Muse in getting the ticket.

“They aided in the purchase of the ticket and drove Muse Abdikadir Muse to the Grand Rapids airport, each knowing the true purpose of the travel was for Muse Muse to join and fight for ISIS,” read the statement.

In a complaint filed in U.S. District Court in Grand Rapids, an FBI agent alleged that all three men recorded videos pledging allegiance to ISIS.

“Muse Muse and Haji allegedly discussed with each other their desire to join ISIS, kill non-believers and even to potentially use a car for a martyrdom operation to run down non-believers here in the United States if they could not travel overseas to fight for ISIS,” according to a statement from prosecutors.

The three men are charged with conspiring to provide material support to a designated foreign terrorist organization, which is punishable by a jail term of up to 20 years in federal prison.

The suspects were born in Kenya but are U.S. citizens. Haji is a naturalized citizen and the brothers received citizenship as minors through the naturalization of their parents.

Federal agents first began looking at the three men in April 2016 when a review of Mohamud Abdikadir Muse’s public Facebook page “revealed frequent posts of photos, videos, and statements and commentary that were pro-ISIS in nature and what can be described as violent, extremist propaganda,” the complaint states.

In June 2017, an undercover FBI employee posing as an ISIS recruiter began communicating with Mohamud Abdikadir Muse via Facebook.

The suspect said he wanted to join the terrorist group, was saving his money to travel to Syria and that he “planned to die with a gun in his hand fighting for ISIS.”

Man, 33, Dies after being Bewitched for Stealing Funeral Money < Previous
The Top Stories on the Internet Today (Friday January Next >
Recommended stories you may like: