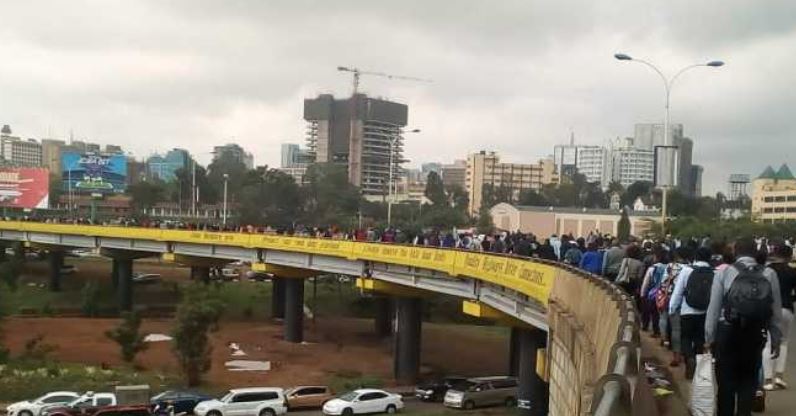 The government has announced a pilot program prohibiting motorists from entering the Nairobi CBD on two days of the week- Wednesdays and Saturdays.

In a press briefing in Nairobi on Monday, Transport Principal Secretary Paul Maringa said there will be dedicated parking in Uhuru Park and Railways as no car will be allowed within the city centre during these two days.

Only police vehicles, emergency cars and bicyclists will be allowed into the city centre on the two days, starting February 1.

During the set days, hawkers will be permitted to conduct business, Maringa said.

The PS noted that the exercise will generate Sh39.5 million daily revenue to the government from over 100,000 hawkers. He said the move will employ many, generating Sh 3.8 billion annually.

He said the exercise will be fully implemented on Kenyatta Avenue, University way, Moi Avenue and Haile Selassie, before heading to Westlands.

According to Maringa, matatu operators will drop and pick passengers at the designated termini, while private car owners have been advised to leave their vehicles at home and use public transport on the two days.

The pilot program is also aimed at decongesting the city to allow the government to map out the much-hyped bus rapid transport (BRT) system.

Transport CS James Macharia announced the BRT System will begin next month. The first batch of 64 BRT buses is ready for shipping from South Africa.

The CS added that sectoral representatives were concluding negotiations on the acquisition of 11 light trains from Spain, for use alongside the buses.

Mr Macharia said twenty more trains will be shipped in due course, noting that for efficiency in the city’s transport sector, at least 900 BRT buses are required.

“We have given local manufacturers the templates for the buses. After the pilot programme, the private sector can work with them to manufacture the remaining buses,” he said.

CS Matiang’i Announces Competition for Cleanest Police Station < Previous
The Top Stories on the Internet Today (Wednesday January 30) Next >
Recommended stories you may like: