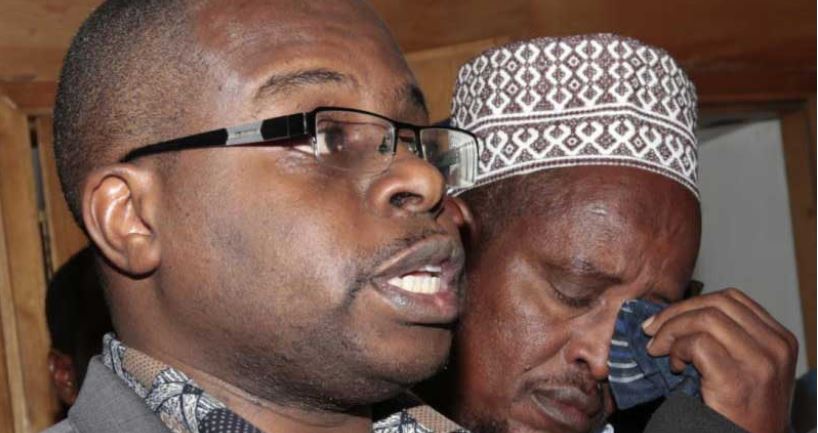 The family of former Garissa Finance CEC Idriss Mukhtar has claimed that they have been receiving death threats from unknown people via calls and text messages.

Mukhtar was shot in the head two weeks ago in Nairobi and is currently fighting for his life at a Nairobi hospital.

Speaking during a press briefing, Aden Mukhtar, the father of Idriss, said they are living in fear and accused police of lethargy.

“As a family we are very hurt and we are praying that justice will be served for our son. We are even receiving threats but we hope those involved will be charged,” said Mukhar.

He added that the former CEC is still in the intensive care unit in a very critical condition,

The family’s lawyer, Charles Kanjama, confirmed the death threats saying the family has since recorded statements with the police.

“We want to see all the suspects in court and charged because we cannot allow people to be taking or attempting to take other people’s lives in a country where we are governed by law. Idriss is now fighting for his life while those who wanted to kill him are just outside there trying to run away from their actions,” Kanjama said.

They spoke three days after David Mwai, the prime suspect in the shooting, was found dead in a cell at Parklands Police Station. Mwai had reportedly confessed to having been hired to kill Idris, who was shot on August 19 at Kileleshwa in Nairobi.

According to police, Mwai committed suicide but the family is convinced there is an attempt to cover up the murder.

“We are concerned about the mysterious death of David Mwai, who was going to provide critical evidence, the disappearance of his wife, and the testimony of the sister, which seems to give direction that there was an attempt to cover up a critical piece of the investigations,” the lawyer said.

“Let me say that my son was shot because of investigating corruption,” Aden said, adding that the release of some suspects was proof of interference in the investigations.

“There were people calling him, giving him information on his movements, where he spent time, where he prayed, telling him that they were sent by someone prominent from his county to eliminate him,” Aden said.

He said the attackers had asked Idris to part with more money for them to spare him.

PHOTOS -SportPesa CEO Turns 40 in Exquisite ‘Casino Royale’ Theme Bash < Previous
Hilarious Posts by Kenyans on Social Media to Take Away Those Monday Blues Next >
Recommended stories you may like: