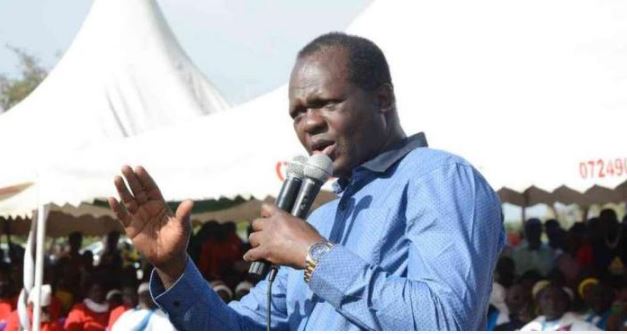 Jubilee Party secretary-general Raphael Tuju has said the handshake between President Uhuru Kenyatta and Raila Odinga earlier this year has transformed the lives of his relatives in his rural home.

Tuju, who hails from the same county with ODM leader Raila Odinga, said the handshake has made it possible for his mother to go to the market.

The former Rarieda MP was speaking on Monday at Kanyimach Village in Rongo constituency during the burial of the late Migori Senator Ben Oluoch.

Tuju, who was welcomed by Siaya senator and minority leader James Orengo, received a warm welcome as he rose to read Uhuru’s condolence message to mourners.

“Let me call our brother and son of the area Tuju to address us before we call the other leaders,” Orengo said as quoted by the Star.

The local daily reports that when Tuju said he had the president’s message, the crowd celebrated him as they had thought it was being read by Senate speaker Kenneth Lusaka.

“I am happy I can now read the president’s speech in Migori, this spirit of the handshake has even made my mother go to the market in peace,” Tuju joked.

In the spirit of good cheer, Tuju said he was told by Orengo that Migori residents have new shoes and won’t throw them at him for reading the speech.

He was, of course, making a reference to Uhuru’s first visit to Migori in his first term when shoes were thrown at his presidential podium at Migori Primary School.

The Hottest Stories on the Internet Today (Tuesday July 10) < Previous
OMG: Nakuru Man Kills Sister For Stealing Sh800 Next >
Recommended stories you may like: