Moses Kuria: Obama Did Nothing For Kogelo, Kenya 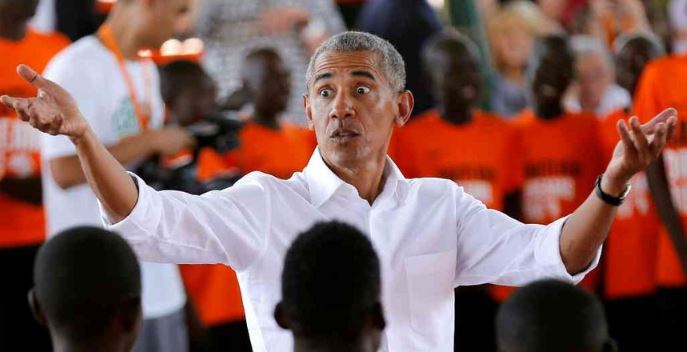 Gatundu South MP Moses Kuria has expressed his disappointment with former US President Barack Obama, whom he says has done nothing for Kenya.

The often-controversial lawmaker also took a dig at Kenyans saying, “Africans, especially Kenyans, are a weird lot”. Moses Kuria noted that when Obama was President, he did nothing for Kogelo, Kenya, and Africa.

“Barack Obama was President of the United States for 8 years. The most powerful person on earth, with unfettered access to the awesome American economy and the nuclear codes. He did practically NOTHING for Kogelo, Kenya or Africa. Nothing! Zero!,” wrote Moses Kuria on Facebook.

He went on: “Today as a Eunuch former President he visits Kenya, we close all the roads for him. He then proceeds to Kogelo, body-searches host Governor Cornel Rasanga and reduces my good friend and Lupita Nyongo’s daddy into a spectator.”

” The skinny kid with a funny name then delivers a 7-minute hollow speech with a curtain raiser from his sister Auma who sets the stage by giving a scathing and condescending indictment of Luo Nyanza leaders. No wonder Baba Raila Odinga skipped the event, rightly so,” wrote Moses Kuria.

“Meanwhile the Chicago benefactor goes on to open a US $ 200K obscure centre for God knows what. The guy found Bill Clinton’s Africa Growth and Opportunity Act (AGOA) in place.

“The same was expanded by President George Howard Walker Bush. Obama did nothing, absolutely ZERO to expand AGOA. Today he launches a US $ 200K whatever in Kogelo. Nani alituroga??” posed Kuria.