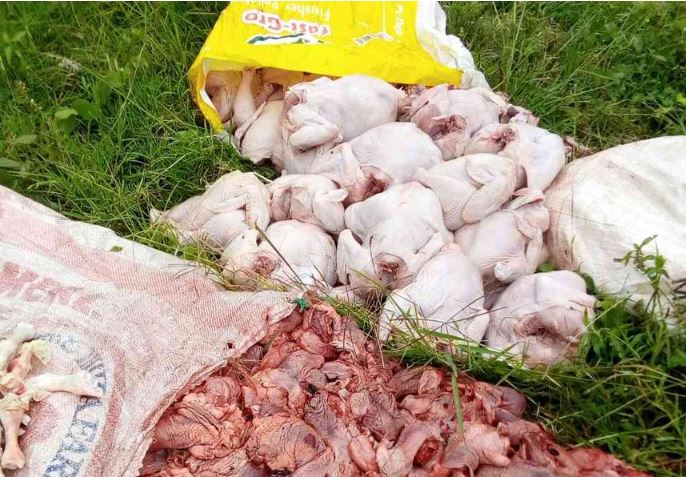 Police and public health officers in Juja have arrested four men who slaughter chickens under unhygienic conditions and sell them in Nairobi without inspection.

Ther four were arrested Saturday after a tip-off from residents of Malaba area in Witeithie who alerted Juja DCIO Obedie Kiio and OCS Zachery Ateya as they patrolled the area.

“The officers raided [the premises they were informed of] and arrested four men who had already slaughtered 307 chickens worth over Sh107,450,” Juja Sub-county AP commandant Doreen Gitonga said.

“We ascertained that the place was unhygienic. Lack of water made it more pathetic and the chickens had not been inspected as required by public health regulations.”

Gitonga added that the unscrupulous businessmen did not have documents of medical clearance. She further observed that the unhygienic conditions meant the chickens were unfit for human consumption.

“We appeal for members of the public to buy chicken or any other meat from the right places and ensure it is inspected,” the officer said, adding that genuine business people should make use of the slaughterhouses in Juja and Thika.

“Meat is not supposed to be carried in bags but in meat safes. This chicken is condemned,” he told reporters, accompanied by his Juja counterpart Peter Kiarie.

The officials asked consumers to look out for genuine official stamps on packages.

Gitonga said police will obtain a court order for the disposal of the chicken.

Jamaican Reggae Star Chronixx Performing in Nairobi This Weekend < Previous
Obama Urges Kenyan Youth to “Demand Even More Progress” Next >
Recommended stories you may like: