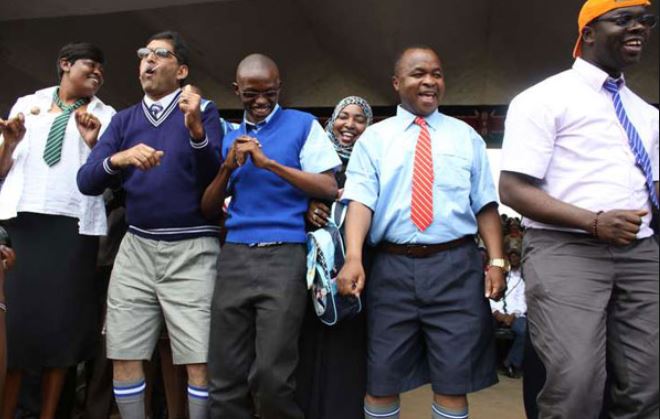 The government has revealed an ambitious new plan to have all students in Kenya wear the same school uniform.

The move comes after the successful implementation of a uniform colour for school buses.

Confirming the plans, Education Principal Secretary Belio Kipsang said that they would seek to have students wear a uniform of the same colour and made with the same fabric.

The PS said that he wants local textile industries like Rivatex in Eldoret to prepare to manufacture the new uniforms once the new policy is adopted.

“As we move towards having the same uniform and fabric in all our schools we want Rivatex to prepare so that they are able to play a role in the manufacture of the uniforms that will be required,” Kipsang said.

Speaking at the Moi University-owned Rivatex firm in Eldoret, Kipsang said they are in discussion with stakeholders to effect the new uniform policy.

The move would represent a major shift as Kenyan schools have always come up with their own uniform policy.

It is expected that the uniforms will be differentiated by the school emblems and badges, as implemented in other countries such as Ghana.

While the proposal has been frowned upon by a majority of Kenyans as useless, a few are of the view that the new policy will go a long way in bridging differences between students and families of widely disparate income levels

The government is also seen to have ruled out the idea of home clothes as that would just create barriers between students and decrease student focus.

All The Trending Images in Nairobi Today < Previous
The Hottest Stories on the Internet Today (Tuesday July 10) Next >
Recommended stories you may like: