What Sonko Wants President Uhuru To Do About Loss of Sh3.2B by Kidero’s Government 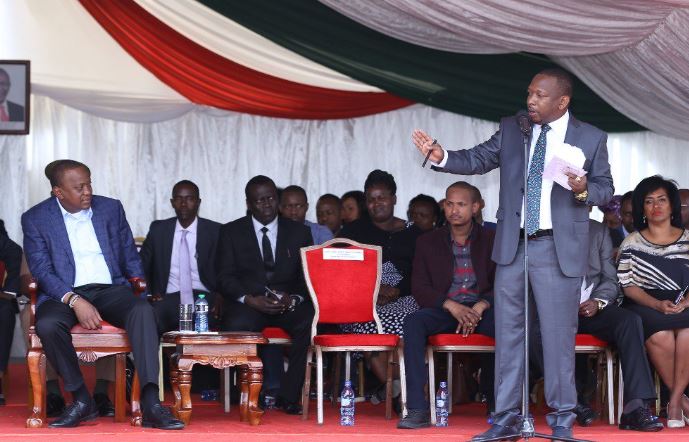 Mike Sonko has once again accused his predecessor Evans Kidero of misappropriating funds meant for the development of the city.

The Nairobi County boss on Wednesday accused Kidero of misappropriating Sh3.2 billion meant for the construction of roads. Speaking at an event to issue title deeds to Eastlands residents, Sonko noted that roads repair was at the top of his list saying that things could have been better had the previous leadership not squandered the public coffers.

According to Sonko, the Sh3.2 Billion which had been allocated in the 2016/2017 financial year towards the construction of roads ended up being used to pay lawyers and was distributed to county officials.

“Some of the money was used to pay lawyers while the rest was distributed among some of the members of the previous county government,” said Sonko during the event presided by President Kenyatta.

Sonko commended the President on the steps taken towards the fight against corruption and requested that once Uhuru is done with the current scandals, he should look into the misappropriation of funds by Kidero’s government.

“The Sh3.2B that was released by the government for roads was not used for that purpose by the previous Nairobi county government, he said.

“I am then asking, Mr. President that you order a probe into the loss of that money.”

President Kenyatta announced that the national government had set aside Sh4B for road repairs in Nairobi County.

He urged county officials to focus first on roads in Eastlands and called on Nairobi residents to help in work supervision.

“We are going to work closely with the county government in improving roads within the city, national government has set aside Sh4b to supplement what Nairobi County is offering for the same. Eastlands roads should be the first beneficiary,” said Uhuru.

“This time round we will keenly monitor and I call upon residents to help also monitor if the contractors are doing good work on the roads.”

Hilarious Meme Compilation (Thursday May 31) < Previous
All The Trending Pics in Nairobi Today Next >
Recommended stories you may like: