ODM: Wetangula Challenging Raila to a Presidential Contest is Laughable 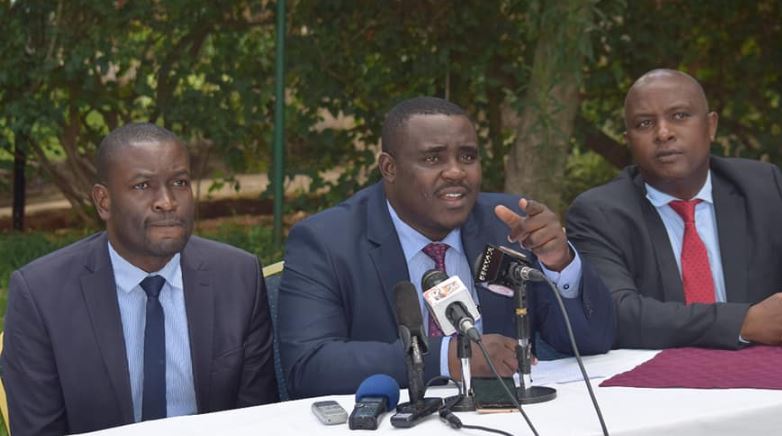 The Raila-led Orange Democratic Movement(ODM) has come out guns blazing in response to Moses Wetangula’s recent attack on the opposition leader.

The Bungoma County Senator dared Raila to presidential contest in 2022 as he threatened to expose him. He was responding to Odinga’s remarks that the merger between Ford Kenya and Mudavadi’s ANC was an alliance based on tribal lines.

“If Raila continues telling lies about us we will tell Kenyans the truth about him,” Wetangula warned.

“For Raila, it is never tribal when Luo Nyanza stands behind him but when other communities support their leaders it is tribal,’ added Weta.

“The amusing thing is how Raila has sunk so low to engage in such cheap politics. You can actually see he is the only one defending the handshake which was between him and Uhuru (President Kenyatta).”

Wetangula added that Raila does not respect NASA colleagues and his days in politics are numbered.

“Through his actions, it is true he is heading into political oblivion,” he said.

Responding to Wetangula’s remarks, ODM released a statement on Tuesday afternoon describing him as a coward and loser attacking Raila just to stay afloat politically.

According to ODM, Wetangula challenging Raila to a presidential contest is “ridiculouas and laughable.”

We have read with interest sentiments appearing in section of the media today attributed to Bungoma Senator Moses Wetangula in which he attacks H.E. Raila Odinga over alleged attack by the Nasa leader on ANC and Ford Kenya parties.

The statement by Mr. Wetangula purporting to be challenging Hon. Odinga to a presidential contest is ridiculous and laughable. We may not know who will be on the ballot in 2022, but we are sure that in usual form, Wetangula will certainly not be one of those on the ballot. It is the kind of statement expected from cowards and losers, which Wetangula certainly is.

The entire Luhya nation knows that Wetangula is a non-issue, even in his own county of Bungoma especially after the cowardice he exhibited on the 30th of January 2018. All Kenyans know that it took Mr. Odinga’s support for Wetangula to win the Bungoma Senate seat in 2013 and 2017. In fact, Wetangula was, and remains a non-issue in Western without Mr. Odinga’s backing. His current situation where he is never heard unless he attacks Mr. Odinga attests to this fact.

It is strange that in the middle of deepening economic crises for the people of Western Kenya, including the collapse of Nzoia and Mumias Sugar Companies, Mudete Tea Factory, Panpaper and others that were the economic mainstay for the people of western and massive scams involving key government operatives who have stolen from farmers, including those in Trans Nzoia through the National Cereals and Produce Board, the youth through the NYS and from Kenyans through the KPLC, Mr Wetangula has remained quiet and finds his voice only against Mr. Odinga.

It confirms that he is one of the self-styled principals of NASA who only survived by hanging onto Mr. Odinga’s coat. Without Mr. Odinga, Wetangula is lost. His position as so-called principal means nothing both to himself, the Luhya nation and the Republic of Kenya.
We remind Senator Wetangula that he is where he is because at some stage, he began to entertain a false notion that he was his own man and began biting the hand that fed him.
The more he continues to bite, the more he will sink.

In the meantime, Wetangula needs to know that under his leadership Ford Kenya has become a diminished good in Western Kenya. The Luhya nation is solidly behind Mr. Odinga by choice and Mr Odinga does not need brokers to reach the Luyha nation.
Mr. Odinga has long built a relationship with the Mulembe Nation for his principled stand on issues of importance to the nation and not by being windy on what matters. Until Mr. Wetangula gets into that league, he will remain inconsequential in Luhyaland and in the Republic of Kenya.

As the new leadership of the Community we reiterate our call for the Luhyia Nation to seek unity of purpose that will see us solve our long standing challenges like poverty and education and shun brokers who want to herd us into one tribal Boma so that they can auction us to the highest bidder.
Signed …………………Senator Cleophas Malala
………………….Hon. Godfrey Osotsi SG ANC
…………………Hon. Edwin Sifuna SG ODM

Loading...
Hilarious Meme Compilation (Wednesday May 30) < Previous
All The Trending Images Today Next >
Recommended stories you may like: