Deputy President William Ruto on Wednesday took a cue from his Boss and pleaded with Kenyans for forgiveness.

Hours after President Uhuru Kenyatta highlighted the need to forge peace and unity in his State of the Nation address, the DP took to social media asking Kenyans to pardon him for any offence he might have committed.

Ruto pointed out that he had forgiven all those who had wronged him and urged Kenyans to remain firm in their quest for unity.

“In keeping with His Excellency’s statement, l William Samoei Ruto unreservedly apologise to anyone offended or hurt in anyway by what I have said or done at any time. Find it in your heart to FORGIVE me. I have forgiven ALL those who wronged me. Let’s embark on BUILDING the BRIDGES of friendship and UNITY,” Ruto tweeted. 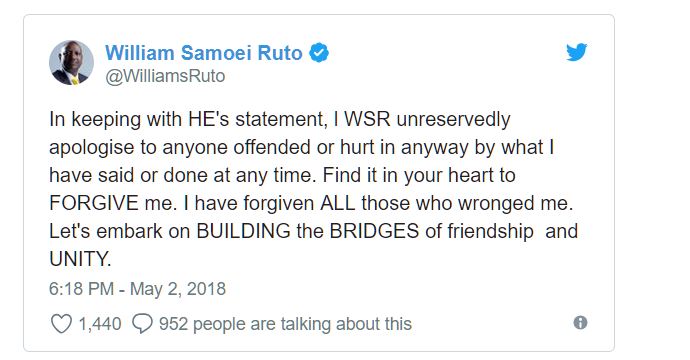 During the key address, President Uhuru called for national unity to move the country forward.

“We leaders have to admit that last year we failed in our duty to preserve the unity of this country and we must make amendments. First I pray that all of us will spend the days and weeks after this address repairing the bones that frayed last year. let us each apologise for our words, anger and malice that Kenya had,” said Kenyatta as the House burst in applause.

“Let us shake hands and embrace our neighbours and let us celebrate the diversity that is God’s gift to us.”