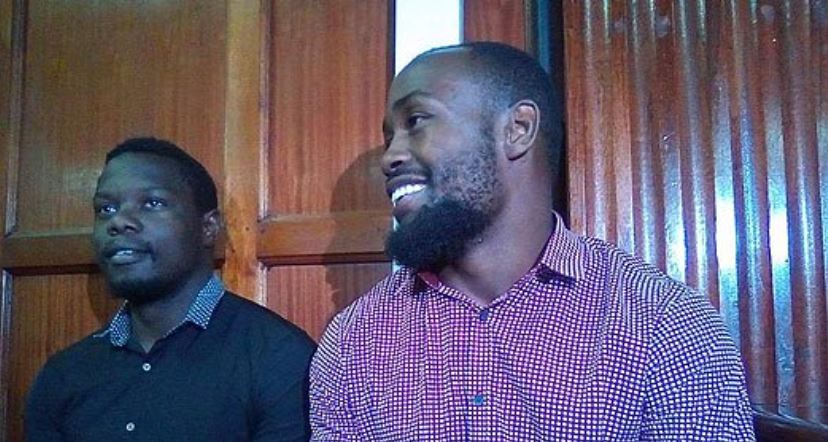 According to the charge sheet, Lawrence Frank Wanyama and Alex Mahaga Olaba are said to have committed the act at Seefa apartment in Highrise, Nairobi on February 11, 2018.

Their lawyers Wafula Simiyu and Ombui Ratemo asked for lenient bond terms noting they have been contracted by the national rugby team so they are not flight risks.

The lawyers added that the players underwent DNA tests and that they need their passports for travel to represent Kenya in the forthcoming rugby series.

Wanyama and Mahaga were freed on bonds of Sh1 million or cash bails of Sh500,000 each.

The investigations started on February 11, when an upcoming Kenyan female singer, identified in court papers as W.A, reported to police that she was gang-raped on her birthday.

In her statement to the police, the woman notes that she only knew one of the two rugby players and after a night of merry-making, she went home with them.

It was then, she claims, that they took advantage of her inebriated state and raped her repeatedly, refusing to take no for an answer.

She further says that she went to a hospital the next morning, but did not report the incident to the police, not until a test showed she was pregnant.

She says she does not know who among the two sired the child.

“I was slipping in and out of consciousness maybe due to shock but I was helpless. I couldn’t fight two men who play rugby professionally. Obviously, they were stronger hence I let them do whatever they wanted to do the whole night,” she claimed.

“I could’ve reported the case to police but I was in denial, shock, pain and exhausted. I didn’t want to report also because of the profile of one of these rugby players.”

The musician said she tried to confront Wanyama with the allegations but he dismissed her telling her to look for a lawyer in case she decides to go public.

In their statements, the sportsmen maintain that sexual contact was consensual.

They further accuse the woman of attempting to blackmail them by threatening to publicise the story if she wasn’t paid.

Hilarious Meme Compilation (Tuesday April 24) < Previous
The Trending Images in Nairobi This Tuesday Next >
Recommended stories you may like: