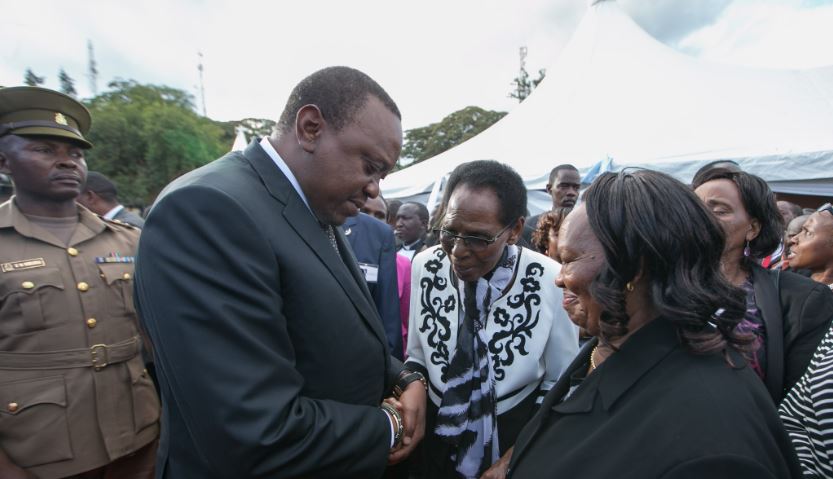 He said this is the only way the country could honour the second liberation heroes, which Matiba is viewed as a key crusader.

President Kenyatta spoke during the final memorial service for the departed hero of multi-party democracy at Ihura Stadium in Murang’a during a six-hour ceremony attended by thousands of mourners including Deputy President William Ruto and former Prime Minister Raila Odinga.

“This is the greatest honour we can give to Matiba.  We must emulate the fallen hero by also being compassionate and considerate of others,” said President Kenyatta who described the late Matiba as a great patriot and nationalist.

He said the country cannot entrench democracy nor thrive without peace and unity.

On the Constitution, President Kenyatta said the ideals and changes that the late Matiba fought for were now entrenched and protected in the country’s supreme law.

President Kenyatta said some Kenyans were not happy with his recent “handshake” of unity with Mr. Odinga because they thrive on chaos and commotion but unity is a key prerequisite for the country’s progress.

He said the new-found unity with Mr. Odinga that started with the historic “handshake” had nothing to do with succession politics of 2022.

The President urged leaders to learn the art of sorting problems without insults, hate or shedding blood.

He said the sacrifices made by the heroes of the second liberation — time, energy and resources — were enough, and political leaders should now stop fighting.

The Head of State said the Government will also explore ways to honour past heroes including the late Matiba.

President Kenyatta emphasized that unity and peace will allow the country to concentrate on more important issues like health, security, infrastructure and the future of millions of jobless Kenyans.

“These are the things that are of major concern to us. Let’s concentrate on what is important to the people,” he said.

Deputy President Ruto described the late Matiba as a patriot and nationalist who stepped out of his comfort zone and fought for multi-party democracy.

“When Kenneth Matiba stepped out of his comfort zone to fight for multi-party democracy, he did not do so for his village, his community or county. He did so for every Kenyan so that we can expand the democratic space that today makes us a multi-party democracy,” the Deputy President said.

He thanked President Kenyatta for reviving the vision that Matiba and other nationalists had of a united and prosperous country devoid of negative ethnicity, division and hate.

The Deputy President emphasized that when the legacy of President Kenyatta is written, it will about the courage he had to unite the country.

“Your Excellency the President, when history is written, your legacy may not necessarily be about the Standard Gauge Railway, although that is a great achievement. It may not be the 6.7 million Kenyans who today enjoy electricity in their homes. Neither will it be about the 7 million Kenyans who today have NHIF cards in their homes, although that is also great. But your legacy will be the courage you had to assemble us and tell us that it is possible for us to unite,” the DP said.

On his part, Mr. Odinga said Kenya is a great nation and he is determined to work with President Kenyatta to bequeath the youth even a better country.

He said his recent efforts to reach out to President Kenyatta was not informed by the politics of 2022 but for the greater interests of the nation.

The opposition leader described the late Matiba as a great Kenyan businessman, sportsman and a generous philanthropist.

Yesterday’s memorial service was the second requiem ceremony, following the first one at the All Saints Cathedral, Nairobi, on Wednesday where President Kenyatta described the late Matiba as a father, mentor and friend who was caring and highly considerate of others.

A sea of humanity thronged Ihura stadium to bid farewell to the fallen political icon who Kenyans accept as the father of multi-party democracy.

Murang’a town came to a standstill as many business people closed shop to join the rest of the mourners at the stadium to give the late Matiba a befitting send-off.

Enroute back to Nairobi, President Kenyatta and the DP stopped at Kenol in Murang’a, Witeithie in Kiambu and Githurai where they said the time for politics is over and they will focus on improving the lives of Kenyans in line with the Jubilee manifesto.

Raila Narrates How He Sent Message About Matiba’s Stroke on Toilet Paper < Previous
The Hottest Stories on the Internet Today (Monday April 30) Next >
Recommended stories you may like: