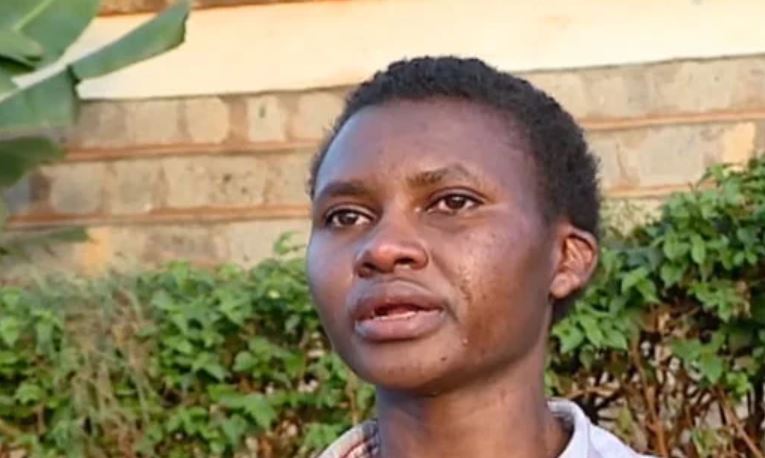 A 25-Year-Old woman has left the country shocked with a heartbreaking story about her ordeal at the hands of her employer in Nairobi’s Runda estate.

Mercy Mwake, who was working as a househelp for Beatrice Muthoni Nderitu, had allegedly been held captive and mistreated for four years since 2014 until her lucky escape on Friday.

She told Citizen TV that she was subjected to routine beatings and was never paid a salary for two years.

Mercy further said she was always overworked, waking up at 4:30 am and clocking off past 10 pm.

During the interview, she revealed scratch marks on her neck and swollen knuckles claiming that her cruel boss would use anything to torture her including a wooden cooking spoon and cups.

“Sometimes if she finds out that I have made a small mistake and what I did was not to her satisfaction, she will beat me up,” narrated a teary Mercy.

“One day she picked a cup and hit me on the back of my head, opening it. It was the second time she had done that to me.”

During the interview, Mercy’s brother, Onesmus Mwaura, revealed that the employer from hell had lied to them that their daughter had left for another job in Mombasa. In her four years in captivity, she never spoke to any of her family members.

Mercy further gave a shocking narration of how her employer had allegedly circulated her picture to security guards manning the gate with instructions that she should be denied exit from the posh estate.

Beatrice Muthoni Nderitu was picked by police from her posh house in Paradise Kasirini, Runda and taken to Muthaiga police station

The Trending Images in Nairobi This Thursday < Previous
Why Sonko Has Been Forced To Remove National Flag From His Official Vehicle Next >
Recommended stories you may like: