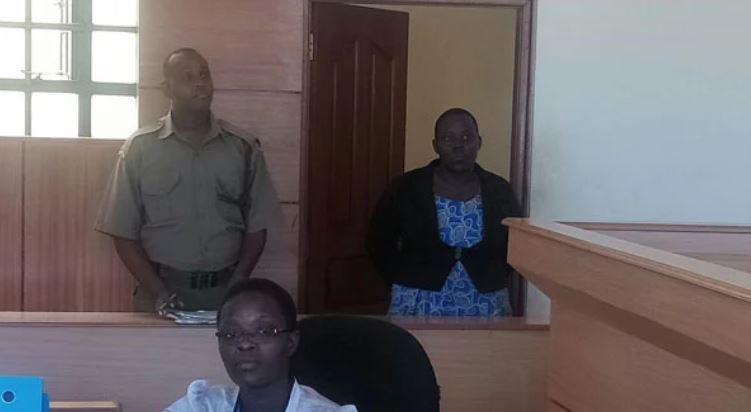 A woman who mysteriously escaped from a court in Kisumu after being convicted for murder presented herself before the same court yesterday.

Martha Auma Nyagol, a P1 trained teacher from Kabondo in Sondu, had been found guilty of murdering her husband Jared Ochieng Otieno on the night of May 26-27 2014 by strangling him with a belt at Kanyakwar Village in Kisumu East District within Kisumu County.

But as Justice David Majanja delivered the judgment on Wednesday, Nyagol took advantage of a security lapse and vanished from the courtroom.

On Thursday, Nyagol, wearing a black jacket and a light blue flowery dress, returned to the chambers with her elder sister Lillian Ajwang.

Her advocate Steve Odumbe told the court that she was apologetic for what had transpired on Wednesday adding that her action was not intentional hence the reason she came back to court.

Odumbe said his client was not aware that she was supposed to remain in custody until her sentencing which is slated for April 11.

“She never intended to walk out or disobey this honourable court,” Odumbe said.

“She has never absconded any court proceedings and she is very much apologetic for this incident.”

The lawyer said his client thought she was to come back on the sentencing date since she has always been out on bond.

Nyagol told the judge that she was sorry for her conduct and begged for forgiveness.

The judge did not mete further penalties out after noting she was a laywoman who may have been misled by the security officer.

But the judge reprimanded the security officer, a corporal, who was on duty on Wednesday morning.

The judge directed that disciplinary action be taken on her for sleeping on the job.

Khaligraph Jones: Octo is a Young Talented Guy, I’m Happy For Him < Previous
Sonko Offers Sh300K Cash Reward For Information on Notorious Eastlands Gang Caught on CCTV [Watch] Next >
Recommended stories you may like: