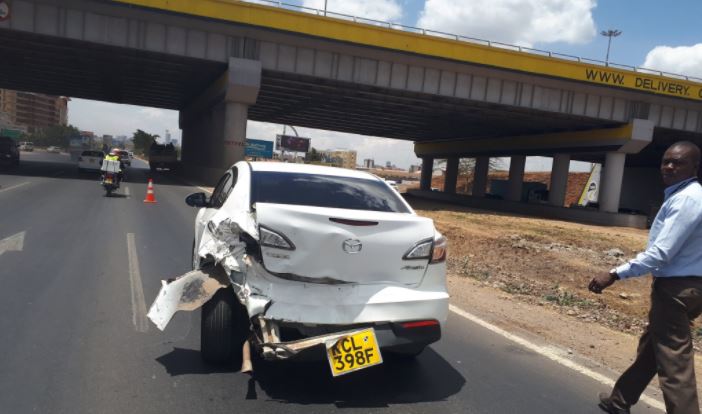 Video footage has emerged showing the moment Boni Khalwale was involved in a road accident.

The former Kakamega County Senator was driving along Mombasa road with his wife when a truck hit their Mazda Axela from behind. The accident happened on Monday at the flyover located near Parkside Towers.

The former Gubernatorial aspirant revealed that they escaped the crash without any serious injuries.

“We’re okay. I’m at the police station with my wife,” said Khalwale yesterday.

Taking to social media, Khalwale blamed the accident on reckless driving by the truck driver.

My wife & I have luckily just escaped unhurt after some recklessly driver hit our car several times from the rear along Mombasa Rd… pic.twitter.com/gKz2Wpfyaj

Khalwale further noted that he did not think any foul play was involved and asked the police to pardon the driver of the truck.

He, however, questioned why the driver rammed into him several times in a subsequent Tweet after dash cam footage from another motorist emerged.

Khalwale Tweeted: “Was this really an accident? he hits three times -he hits ‘aiming’ at the back left? – no brake lights to show slowing down? I JUST DON’T KNOW!!!”

The accident comes months after his four children were involved in an accident in Kaimosi in July last year.

My wives & I thank God for saving our 4 children in this afternoon’s accident at Kaimosi. Kudos my brave son Tigana for controling the car pic.twitter.com/c3aoRreUDL

The Trending Pics in Nairobi This Tuesday < Previous
The Hottest Stories on the Internet Today (Wednesday February 21) Next >
Recommended stories you may like: