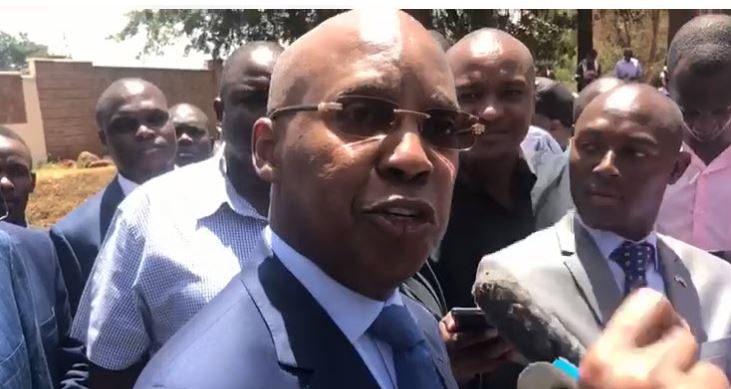 City businessman and Nasa bankroller Jimmy Wanjigi on Thursday said he has engaged local and international lawyers over the erroneous publication of his obituary by the Nation Media Group (NMG).

Despite NMG’s apology, Wanjigi expressed displeasure at the publication of the death announcement on the Daily Nation of February 7, 2018.

Flanked by a host of Nasa legislators and officials, he described the publication as a ‘death promise’ and ‘horrific.’

“I don’t think it’s just an advert. First and foremost I am alive contrary to the wishes of Nation,” said Wanjigi.

“NMG yesterday issued a death promise. I don’t take it lightly and I must say what they did was horrific. It didn’t hurt me as much as it hurt my family. My children schooling abroad were being called from all over being told ‘it looks like your father is dead’… This was their wake up call,” said Wanjigi.

Wanjigi claimed that NMG was used as a messenger by powerful forces “perpetuating injustices” in the country to pass a death threat to him.

While talking about his quest for an explanation behind the advert, he maintained that he was not worried about his safety, adding that God was his only protector.

“Kenya right now is going through a twilight zone. But dawn is coming and its not far away. All these things being circulated everywhere, the injustice being perpetuated by a regime supposed to adhere to the law will come to an end. I am not worried about myself, God is the one who gives and takes life,” he said.

Wanjigi said the acting NMG CEO visited him at his home on Wednesday morning and promised that the media house would unmask those behind the death announcement.

“The acting CEO came to see me and apologise. I asked him to tell me who are the people who processed that order and he said ‘give us two hours we will come back to you’. He said their own security has done investigations and they have forwarded the names to the police. I asked for the names because I do not believe the State which they handed over the matter to are the ones who will investigate this. They never got back to me,” said Wanjigi.

Wanjigi was speaking at the Directorate of Criminal Investigations where he and 11 other NASA leaders, had been directed to appear by the court.

All The Trending Images This Furahiday < Previous
KNH Medical Team Re-Implants Teenager’s Hand in Delicate 7-Hour Procedure[PHOTOS] Next >
Recommended stories you may like: