Why Githu Muigai Has Resigned as Attorney General According to KOT 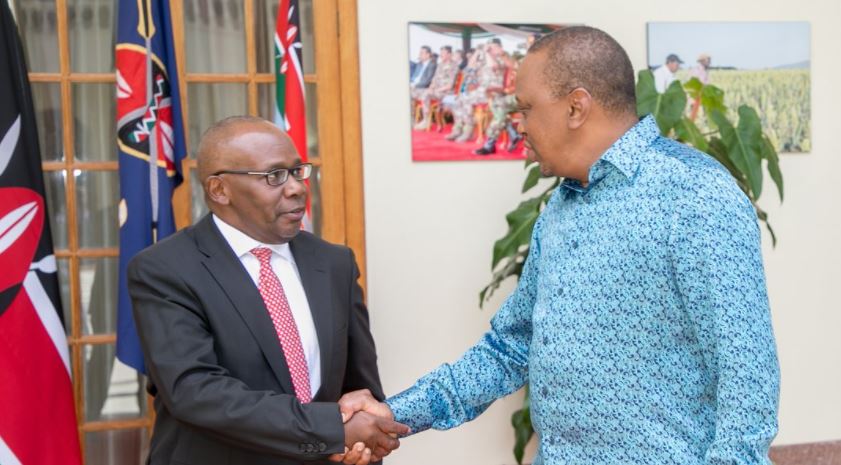 The country is still reeling from the shock resignation of Attorney General Prof Githu Muigai.

While announcing his stepping down yesterday, President Uhuru Kenyatta said he had received Muigai’s resignation with regret.

“Fellow Kenyans I have today the 13th of February 2018, received with regret the resignation of Professor Githu Muigai from the office of Attorney General effective the date of the appointment of his successor,” stated Uhuru.

The Head of State added that he has nominated Judge Paul Kihara as his replacement.

“Under the powers vested in me by Article 156(2), I have today nominated the honourable Justice Paul Kihara Kariuki to the National Assembly for approval as our next Attorney General,” a statement by Uhuru reads.

“I have also today forwarded the names of Kennedy Ogeto for the position of Solicitor-General. I have forwarded also the name of Abdikadir Hussein Mohammed as my nominee for Ambassador to South Korea.

“Mr. Njee Muturi has been appointed to the position of Deputy Chief of Staff.”

President Kenyatta further expressed his gratitude to the departing AG saying, “I wish to place on record, on my own behalf and on behalf of the people of Kenya, our gratitude for the committed and dedicated service that Professor Muigai has accorded to our nation over the last six and a half years that he has served in the office of Attorney General. I wish Professor Muigai all the very best in the next phase of his professional career.”

While no official reasons were given for the resignation by the time of going to press, a majority of observers believe the AG seat might have become too hot for Githu Muigai as a result of the political and legal impasse involving Raila Odinga’s swearing-in ceremony.

He had gone on record to state that the Nasa oath-plan amounts to high treason and is punishable by death.

Following the AG’s resignation, speculation was rife among Kenyans on Twitter(KOT) on the possible reasons behind the stepping down.

We have sampled the reactions below.

Former AG Githu Muigai, is my friend & was my Professor but he disappointed me as our Attorney General … He became a horse whisperer instead of Oracle to the King! He told the King what he wanted to hear instead of what the gods have said! An AG is s Prophet not Court Jester!

“I have received with great suprise the resgnation of AG Githu Muigai..” ???????? pic.twitter.com/wWUWKbadry

AG Githu Muigai has “resigned” and replaced by Kihara Kariuki as the attorney General….Uthamaki must be preserved.

Come 2021, Ruto in preparation of his coronation, will demand for a new Attorney General probably an Arap so & so. Kenya ni Yao.

Haha Nowadays you need a Tall Relative to Prosper. We are living in a Cage and as Caged animals, we move but inside the Cage. -Francis Imbuga. Replacing AG Githu Muigai with Judge Paul Kihara Kariuki to be the next Attorney General is Nepotism at its Best.

AG Githu Muigai
“Raila will face high treason if he will be sworn in”
Raila sworn in and the hornbill resigns.. acheni baba aitwe baba aki

AG Githu Muigai the fake proclaimed mortician has bowed out! No legacy left as Kenya Attorney General other than being reduced to State House spokesman threatening H.E Raila Odinga of high treason which we were eagerly waiting for! Just like us?d tissue paper,Go Githu Go…?

The question we should all be asking is why AG Githu Muigai has resigned?

AG Githu Muigai has resigned and replaced immediately with his brother Judge Paul Muigai Kariuki. At Jubilee we don’t allow for vacuum.

When President Kenyatta said “we shall revist”, he didn’t mince his words. The resignation of AG Githu Muigai and subsequent nomination of Judge Paul Kihara Kariuki as the new AG is just but the beginning of many surprises. Githu’s resignation is a ploy to replace CJ Maraga

Akombe resigned she was met with ridicule, criticism, abuse, hate speech & even Threats
Attorney General AG Githu Muigai Resigns, its recieved like we have lost a hero and some even think it’s a sad day for Kenya.
He was number 4 Kenya enemy after Uhuru, Ruto & Cs Matiang’i

DPP Tobiko ‘resigned’ and ended up being a CS. Let’s see where AG Githu Muigai is headed.

Hon. Kalonzo Musyoka has without fear branded Raila swearing illegal. AG Githu Muigai must have resigned because of that illegal & treasonous swearing he had earlier on warned against going unpunished.

Good riddance!!!!! After failing to terminate @RailaOdinga with treason Prof. AG Githu Muigai has thrown in the towel. #GithuMuigaiResigns

I took a thirty minutes siesta to wake up to the subtly sad, but not so astonishing news of Githu Muigai ‘resigning’ as Attorney General and Kariuki Kihara replacing him in a hereditary way. Githu did not resign. The pompous poor Professor of law was fired; finally!

Kenya’s Attorney General Githu Muigai has resigned. He will be remembered for being a perennial amicus uhuriae. pic.twitter.com/5whLezE0Vi

We’ve seen tough talking individuals and those who tends to threaten president @RailaOdinga come and go.. Attorney General Githu Muigai is just another causality, Githu resignation holds a conspiracy soon to be revealed to Kenyans.. In Kenya you don’t just resign.. pic.twitter.com/Ut8BK3sawn

Don’t be fooled by the narrative that Attorney General Githu Muigai has ‘resigned’. Just like Chiloba, he’s still the main man behind the scenes. The greed for power and money can’t make that jubilee puppet resign.

Jakom after learning that the Man who vowed to hang him to death; Attorney General Githu Muigai has resigned voluntarily pic.twitter.com/6eLNUvSHil

Muthama Swears to Hit Kalonzo Musyoka With Bible If He Refuses to be Sworn-In < Previous
The Hottest Stories on the Internet Today (Thursday February 15) Next >
Recommended stories you may like: