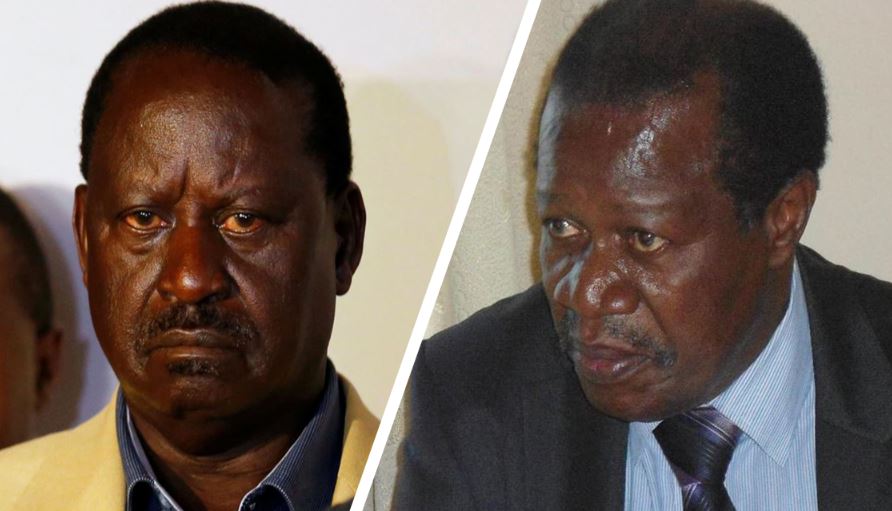 Raila Odinga has refused to concede defeat and has only halfheartedly appealed for calm. This is despite immense local and international pressure, after what most people agree was a credible election.

Some political analysts had predicted well before the election that Raila would try and force a ‘nusu mkate’ government if he lost the election. It now looks like this is his play. On Sunday, he visited Kibera where he told his supporters not to give up and to take a break from work on Monday. This he said is as they await further instructions today.

As the country holds its breath to see what Raila has in store, we can all be sure that it won’t be a concession speech.

We’ve been told many times that we should not fight for them to lead, but since Friday, many lives have already been lost. The numbers been released are conflicting, but according to the Kenya Red Cross, at least 17 people have died.

And yet, Raila has not come out strongly to tell them to stop engaging police for their own sake. I’m not trying to justify use of live bullets on demonstrators, but most people agree that only Raila Odinga has the power to bring all this to an end.

It is not true that he doesn’t control his supporters.. Well, at least not the hooligans looting and burning property. Raila knows a simple word will calm tensions but he has chosen not to make it happen, and actually done the opposite. Case in point Sunday, where his words and those of the ODM MPs can be termed ‘incitement’.

Here’s a story about Raila that I read some time back on social media, which I thought applies to the current state of things. It may provide some context. Bear in mind this was written before last week’s election.

Why do you guys hate Raila? This is a question that has been posed here many times. In fact, one weekend I had promised @Abba that i would write a hekaya, nay, a story from a while ago that killed something in me about the man.
I do not hate the man. He simply does not inspire me and I happen to know something about him that is behind the facade.
In 1993, we had just come from the first multiparty elections. The elections had come through the blood and tears of many of us who braved Saba Saba at Kamukunji and several other demos. We were idealistic young men and women who believed in a better, more just Kenya. We had our heroes in the likes of Matiba and Rubia, Martin Shikuku, Masinde Muliro who passed on before the elections and the young Turks that included koigi, muite, RAO, Kijana wamalwa, Orengo, Imanyara, Kiraitu and many others. They were our generals. I was 28.

The elections in December 1992 found me in Bungoma. We had put in a lot of work to see a number of mps get to parliament on the Ford-Asili and Ford-k ticket, something we considered an achievement considering the kanu juggernaut we had had to fight. In any case, we felt that we were robbed of the ultimate victory through Kanu rigging.

It was therefore with a feeling of betrayal that we received the news of defections of several of the Ford-A MPs from Western in March of 1993. One such MP was Apili Wawire of Lugari who had beaten a former Kanu Secretary General Burundi Nabwera during the 1992 elections.
It followed therefore that in July there was a by-election in Lugari. The entire opposition young turks were there leading us the foot soldiers in a dust and mud campaign that we believed we had won only for the traitor Wawire to be declared winner at dawn in the Mautuma Secondary school hall.
During the campaigns, Alfred Sambu, who had contested the Webuye seat on a DP ticket and lost to Musikari Kombo, had been arm-twisted by the Moi machinery to lead the KANU troops alongside Cyrus Jirongo, the YK92 chairman. He was our chief adversary.

We licked our wounds and repaired to Webuye. While us wakeleketwa went to Park Villa Hotel, the MPs and other leaders went to Musikari Kombo’s home near the Uganda Highway junction, and about 200 meters from Park Villa.
I had just polished a steak and fries and was drowning my disappointment in a Tusker when Alfred Sambu walked in in the company of three other people. The moment he spotted us he started taunting us with shouts of Jogoo while waving the one finger salute.

In the parking lot of park villa were two battered landrover 109 caravans. In them and under them catching some sleep were Raila’s goons from Kisumu; the infamous Baghdad Boys. The shouts of Kanu awakened them and they were like a swarm of bees. Soon they were swarming into the restaurant with shouts of “erego,erego?”(Where is he?). They were armed with truncheons, nyahunyos, a fanbelt and other butu weapons. Sensing danger, Sambu attempted to get out of the restaurant and came face to face with the goons. One of them who was unarmed picked a metal mud scrapper and hit Sambu on the forehead and he fell backwards into the restaurant. As the goons tried to squeeze through the door hotel staff picked Sambu and whisked him into a pantry or the kitchen.

Meanwhile the commander of the gang had with military precision detached some of his combatants and ordered them to go round to seal any exit. It was then that I came out of my stupor and decided to go to a callbox that was at the gate and called Kombo’s Place. As I made the call, one of the three people with Sambu (who happened to be his outside son who also served as his driver) shot out of one of the doors and clambered over the perimeter wall. The goons ran out of the gate to pursue but one of them confronted me and asked if I was calling the police. He grabbed the phone after I told him I was calling mheshimiwa and he confirmed. That is how I survived to write this story.
I realised talking on the phone wasn’t going to save lives and got out and ran very fast to Kombo’s place. He was telling akina Raila what i had told him and on my arrival they were all eager to hear what I had to say.

I quickly narrated what had transpired but it was RAOs reaction that surprised me. While I had expected him to dispatch one of his minions to go cool down the goons to at least save some lives, Raila just nonchalantly said ” Hm, Hm, anatufuata nini?” and he went back to his beer. It was the victims’ fault for being in the wrong place.
That one act, or lack of one, helped me see those who seek power, RAO my hero among them, in a completely new light. These were people devoid of humanity. The ideals of justice and equality they preached in rallies were alien to them. Other acts such as the violent disruption of a ford-kenya delegates meeting in Thika a few years later, the PEV and the MIB saga at Kasarani have not helped repair the negative impression of him I picked at Webuye that sunny afternoon. My faith in him died there……

P/S – Sambu’s son while fleeing misstepped, fell and broke his neck, dying promptly…may he rest in peace.
– By the time the goons were returning to the hotel after the fatal chase police had arrived and they scattered into nearby villages. They were hunted down and at least eight of them were arrested. They went through a grueling murder trial in Bungoma and most of them did not survive remand. by the time I was leaving Bungoma two years later only three were remaining to continue with the trial.

Fake News Country: Did The Mungiki Conduct a Massacre in Mathare and Lucky Summer on Sunday Night? < Previous
The Hottest Stories on the Internet Today (Wednesday August 16) Next >
Recommended stories you may like: