‘If You Want to Be My Minister, I Will Give You a Job Later.’ Uhuru to Raila 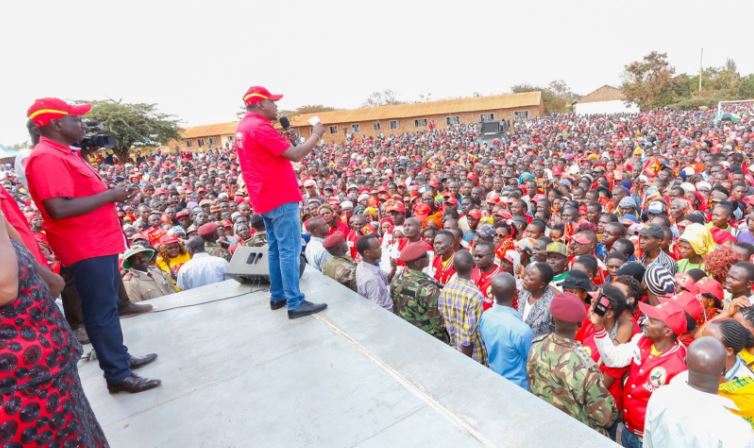 The President and the Deputy President said Raila’s attacks against acting Cabinet Secretary for Interior, Dr Fred Matiang’i, was a sign that he has lost focus.

President Kenyatta said the opposition was wrong to engage in attacks against the CS who is charged with ensuring security for all Kenyans and is also tasked with ensuring that the elections are chaos free.

“You are competing with me and not Matiang’i. Let Government officers do their job. If you want to be my minister I will give you a job later,” said the President when he spoke in Taveta, Taita Taveta County.

The Deputy President said the baseless attacks against the CS were part of the signs showing that the opposition is not ready for elections and has lost focus.

“Leave Matiang’i alone. His job is to ensure security for all Kenyans,” said the DP. “They want confusion because they are not ready for elections. They are looking for a backdoor means of getting power.”

The Deputy President said the opposition should make up its mind whether it wants to be a participant in the election and if they are not ready, they should wait to contest in 2022.

Taveta MP Naomi Shaaban said the attacks against the CS were a backlash against him for his stand on fake certificates.

“They hate Matiang’i because he said he does not want fake certificates,” said the Jubilee deputy Majority Leader.

The leaders spoke when they toured Taita Taveta County to drum up support for the Jubilee Party.

President Kenyatta said he has delivered his pledges to the people of the county including the tarmacking of the Mwatate-Taveta road, whose construction Kenyans have waited for many decades.

The President said the Jubilee Government has also expanded access to electricity, provided free maternal health care, reduced the cost of education and has upgraded the Taveta hospital.

He urged residents to vote for Jubilee so that the Government can continue with its transformational agenda to create more jobs and wealth for Kenyans.

“Vote for Dan Mwazo as governor and all the Jubilee candidates so that I can get a team that will work with me to deliver more development to this county,” said the President.

MP Shaaban said there was a time the opposition used to claim popularity in Taita Taveta but that those days are gone.

“We are getting the development we have been yearning for since independence. We in Taita Taveta are getting our independence now and we are rallying behind Uhuru Kenyatta who is delivering that progress,” said the Taveta MP.

Mr Mwazo, the current senator and Jubilee gubernatorial candidate said the people of the region have shifted to rally behind President Kenyatta because he is a genuine leader who cares about the welfare of all Kenyans.

“In religion we are taught that faith without action is dead. People have moved to where there is faith with action,” said Mr Mwazo.

After the Taveta rally, President Kenyatta visited Wundanyi and Mwatate and was scheduled to wrap up his tour of the visit with a rally in Voi town.

All The Trending Images This Thursday < Previous
After Skipping Debates, Uhuru and Ruto To Hold Live Town hall Meeting… To Pay for 3 Hours Live TV Airtime Next >
Recommended stories you may like: