“I Do Not Cook Polls and I’m Not Related to Raila..” Angela Ambitho 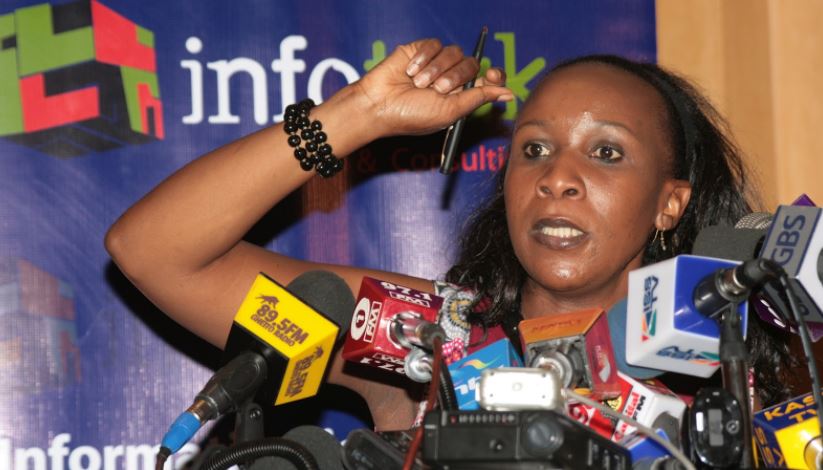 Despite its latest opinion poll showing Uhuru ahead of Raila, Jubilee has no love for Infotrak. This week, the party has stepped up its campaign against the pollster, claiming they are planning to release a new opinion poll which will show that Raila has closed the gap and is possibly tied with Uhuru.

A video circulating on social media shows some unnamed people seated in a room, marking what looks like questionnaires with an Infotrak letterhead. According to those circulating the video, it was evidence enough that Infotrak cooks its opinion polls.

Obviously its very easy to make such a video. Duplicating ‘Infotrak’ questionnaires is quite easy, and if I knew any better, I would call this fake.

But perhaps the ties between Infotrak CEO Angela Ambitho and Cord/Nasa make Jubilee uneasy. In 2015, Angela was one of the panelist at a 2-day Cord retreat at the Great Rift Valley Lodge in Naivasha. There have also been unconfirmed rumours that she may be a distant relative of Nasa presidential candidate Raila Odinga.

Addressing this issue on Tuesday, Kikuyu MP Kimani Ichung’wah said, “What we really are questioning is the credibility of these opinion polls especially those where there are undeclared interests.”

Majority Leader Aden Duale also added his voice saying the polls are Nasa sponsored and are meant to lay the ground work for result rejection. “They want to poison the minds of Kenyans so that they can refuse the results of the election,” said Mr Duale.

Ms Ambitho rubbished those remarks saying that Infotrak actually had no plans of releasing a poll on Wednesday this week. She however said that they will be releasing at least one more poll before the election, terming Jubilee’s statements as pre-emptive.

“We don’t have any data, as we speak, to release,” said Ms Ambitho, “Tell me which pollster will not be releasing results. What is happening is a no-brainer: they are just pre-empting. Because it will happen. When it will happen I can’t tell you because we don’t have data yet. There will be at least one poll.”

Ms Ambitho also rubbished allegations that she is related to Raila, adding that the same line of attack has been used against her in 2007 and 2013.

The last Infotrak opinion poll had President Kenyatta leading by a five-percentage point margin – 48 per cent to Mr Odinga’s 43 per cent.

Dennis Itumbi Delivers Hilarious Comeback After Miguna’s Diss on TV < Previous
The Hottest Stories on the Internet Today (Friday July 21) Next >
Recommended stories you may like: