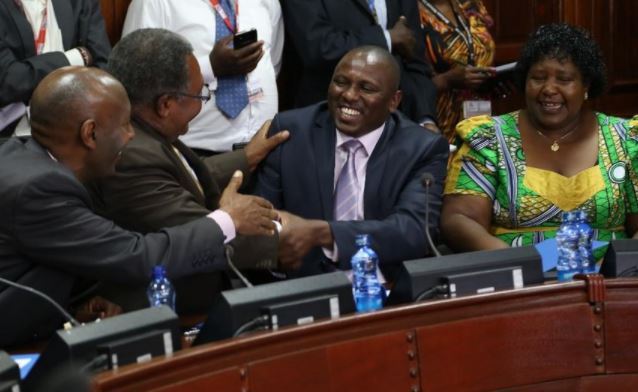 Kikuyu Member of Parliament Kimani Ichung’wa has secured a seat in the 12th parliament.

Kimani, who was elected on the now defunct TNA in 2013, has retained his seat unopposed. In a Gazette notice published by IEBC, the youthful legislator is listed as the only candidate for the seat.

An elated Kimani took to twitter to post: “All Glory and Honour to the Almighty Lord. In serving my Kikuyu people faithfully, I serve my God fulfilling his wish and purpose of my life.”

A fierce defender of the Uhuru regime, Kimani trounced his rivals in the Jubilee nominations and is considered a prominent public personality in Kiambu’s political circles.

He is a member of the Powers and Privileges Committee and the Departmental Committee on Agriculture, Livestock, and Co-operatives in the current Parliament.

The 40-year-old is thought to be eyeing the Kiambu governor seat in 2022.

He studied at Strathmore’s school of Accounting and graduated from the University of Nairobi with an Honours degree in Economics.

‘I Will be Bankrupt and Hopeless if I’m not Reelected.’ Siaya Governor Pleads (VIDEO) < Previous
Hilarious Meme Compilation (Thursday July 6) Next >
Recommended stories you may like: