Nairobi police have banned the discussion of politics by Kenyans in crowd meetings within the city centre.

According to police, the popular gatherings christened Bunge la Mwananchi,  pose a security threat to business premises in the Central Business District.

The meetings which are characterized by discussions on governance, corruption, social welfare and political developments in the country, are most conspicuous at the intersection of Mama Ngina and Wabera streets.

Other venues include the empty square in front of Kenya National Archives on Moi Avenue and Jeevanjee Gardens. 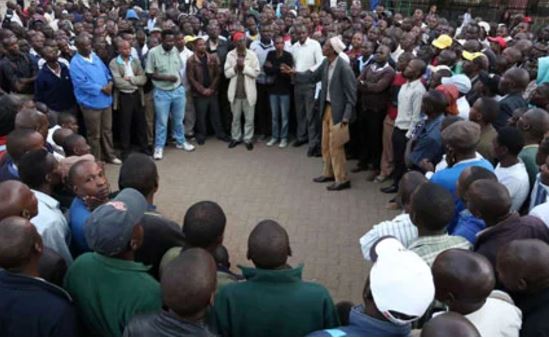 Central OCPD Robinson Thuku said on Tuesday that the gatherings are a threat to businesses on Mama Ngina and Wabera Streets, including the Nakumatt Supermarket, Chase Bank, and the Diamond Trust Bank.

“We are doing away with these groupings in the name of Bunge la Wananchi which are held in front of businesses in the CBD. They are a threat because people have raised concern over their security especially in Wabera street where the crowd has become huge,” explained Mr Thuku.

He, however, clarified that police are not against the freedom of expression, saying such meetings should be held in alternative locations like Uhuru Park where they do not inconvenience business premises.

“We were barred from holding our daily meetings at the City Hall. When we queried, we were handcuffed and taken to Central station where we were accused of urinating in the area and a threat to businesses,” Mr Onyango told Nairobi News.

Members were last month accused of stoning a Chase Bank outlet in the area as President Uhuru Kenyatta submitted his nomination papers to the electoral commission at KICC.

Aden Duale: Raila Odinga’s Philosophy is Threats, Intimidation and Violence < Previous
Hilarious Tweets and Memes from Twitter Trending Topic ‘100 Myths I Don’t Believe In’ Next >
Recommended stories you may like: