Campaigns have reached fever pitch and a lot of it is been conducted on social media. Jubilee that has previously called itself ‘digital’, seems to have been beaten thoroughly in this sector.

Every day, there are anti-Jubilee hashtags and memes. Some social media influencers have dedicated their entire timelines to bash Uhuru and Ruto, and anyone supporting them.

Unlike in the past, it seems the party (ODM) has thrown financial resources behind this online initiative. The vigor in which the bloggers and influencers have undertaken this role can only mean there is some financial motivation. They have even hired some graphic designers to make infographics and posters attacking Jubilee. These are then distributed by the bloggers on all platforms. 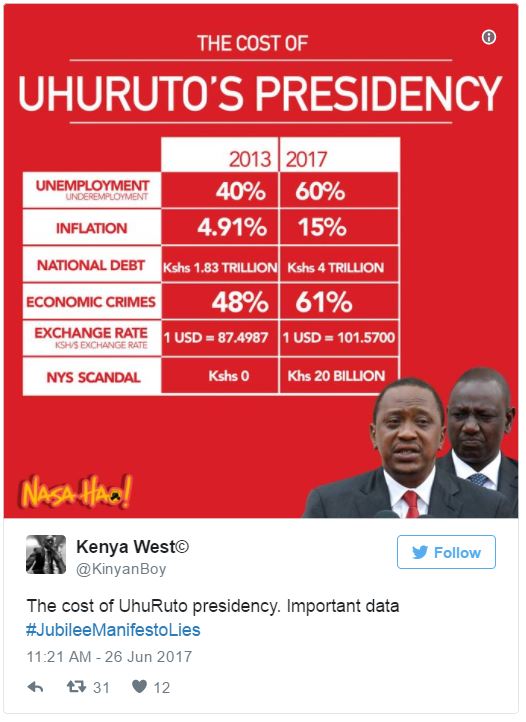 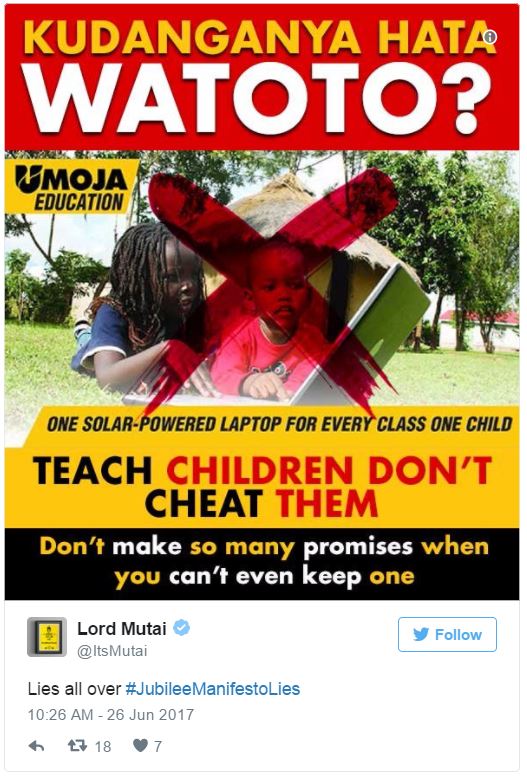 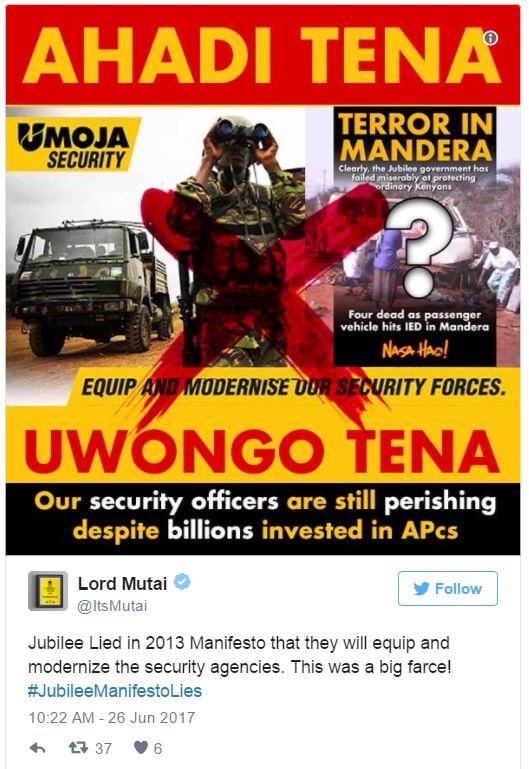 On paper, this sounds like a sound campaign strategy. But is it?

To try and understand this, let’s first ask ourselves why would anyone vote for Jubilee?

This is without a doubt the biggest reason why we vote for anyone in Kenya. Since independence, Kenyans have always voted along tribal lines. The only reason tribe A will support a certain presidential candidate is either because he is of their tribe, or because he is in the same team as their tribal leader.

It is a lot of wishful thinking to say that this year will be different.

Mt. Kenya and Rift Valley (Kalenjin side) will therefore automatically vote for Jubilee. Of course there will be pockets going to Nasa.

2. If you’ve felt the impact of Jubilee government

Collectively, it is very easy for people to scream how Jubilee has failed. But as they say, “Mgala muue na haki umpe”.

Jubilee has had lots of achievement too. Be it in health equipment, maternity fee waiver, SGR, electricity connections etc. Someone who has for instance gotten electricity for the first time in his life, might decide to sift through the noise and vote Jubilee. The same case to a woman who delivered free of charge etc.

This kind of personal impact may not have happened to everyone, but there are many people who saw a positive change in their lives in the last 4.5 years. Of course most will still retreat to their tribal shelters, but Jubilee will get pockets of votes.

Is this enough for a Jubilee win?

We can’t know for sure. What is clear is that using 2013 figures, Jubilee was always going to start with an advantage. With 2 regions voting Jubilee to the last man in 2013, all they needed to do was to try and win over a few voters from other regions like Coast and North Eastern.

Coast and N.Eastern can always go either way since they do not have a strong tribal representation. We’ve seen Uhuru issue thousands of Title Deeds and launch many projects here. Most of these projects were launched with an eye to pinch away Raila’s 2013 votes.

Will it be enough? We’ll find out in one and a half months.

So where is Nasa going wrong?

Nasa is repeating the same mistake over and over. They seem to be satisfied with the votes they think they have, and are not making any serious effort to expand their base.

Their online strategy in particular seems to be focused at vilifying Uhuru and Ruto, baptizing them some very nasty names.

Psychologically, when you are attacked, you go on the defensive. There are Kikuyus and Kalenjins who were planning to vote for Raila, or were sitting on the fence all along. But when they see the other thirty something tribes gang up against them, it brings them back to toe the tribal line.

That Kikuyu who was planning to vote for Raila might have heard the name ‘uthamaki’ enough times and decided to believe it and embrace it.

The simple fact is a given tribe will stand by their leader who is ‘under attack’ from their ‘enemies’. The kind of support and loyalty a tribe will give their leader is determined by the amount of attack he is receiving. 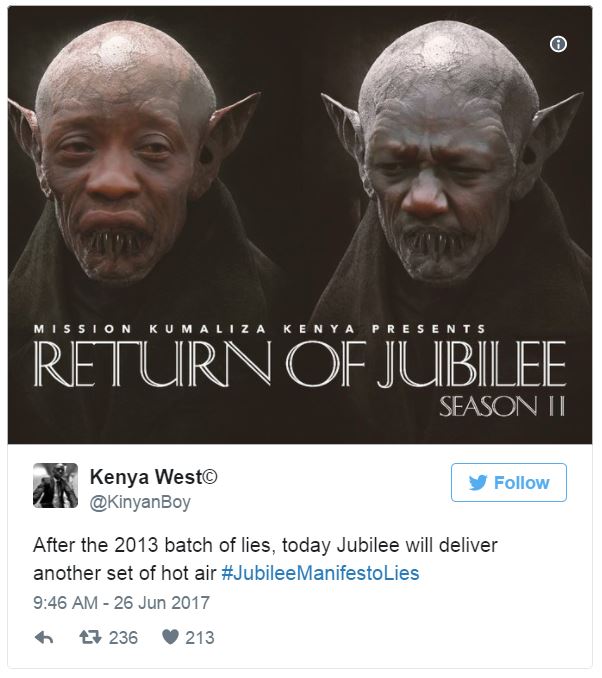 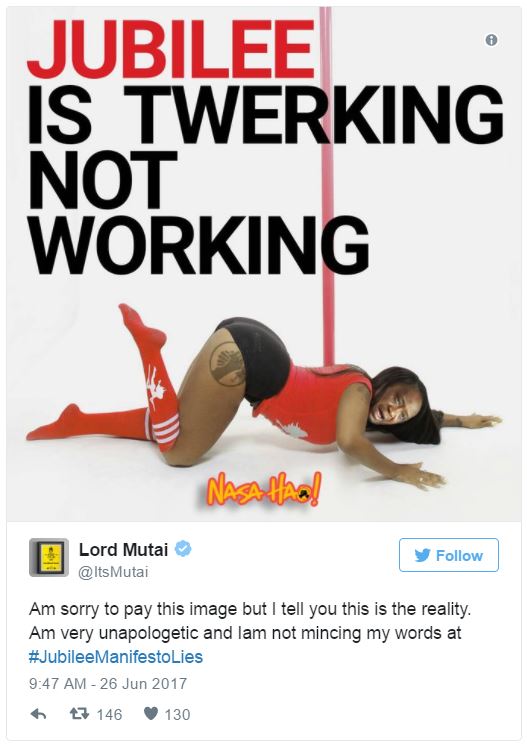 Nasa may be working on the impression that they do not need the tribes supporting Jubilee. This may be a flawed and possibly fatal analysis. Because basically they are planning to go into the election the same way they went into it in 2013, and hope that Jubilee has not won over any new people.

The social media attack dogs are preaching to the same ‘already converted’ congregation. And it’s very easy to prove this by looking at the comments under each post. Nearly all reactions are usually in agreement, meaning the message has been received and accepted by people already supporting Raila.

The people they should be targeting are those still on the fence. But understand, why would someone still be on the fence right now. Most likely, these are people who are not swayed by tribal alignments and often examine facts before making a determination.

Is the cleverly worded propaganda helping to convert them?

If you falsely post that this and this amount was stolen, is your target market likely to Google it and independently establish the facts?

By virtue of the nature of the target market, is the propaganda, half truths and sometimes outright lies having the desired effect?

Propaganda is a necessary tool in all elections for both sides. But when you feed similar propaganda to your hardcore supporters and the enlightened neutrals, it may just backfire.

In my view, Nasa needs to sit down and carefully examine their social media strategy. As it stands, it looks like they are preaching to the same audience that was to vote for Raila anyway. And then head to the election thinking they have it in the bag.

Moses Kuria Blames Nasa for ‘Economic Sabotage’ After Sigiri Bridge Collapse < Previous
The Hottest Stories on the Internet Today (Wednesday June 28) Next >
Recommended stories you may like: