Governor Mutua: My SGR Experience from Nairobi to Mombasa was Magical (Photos) 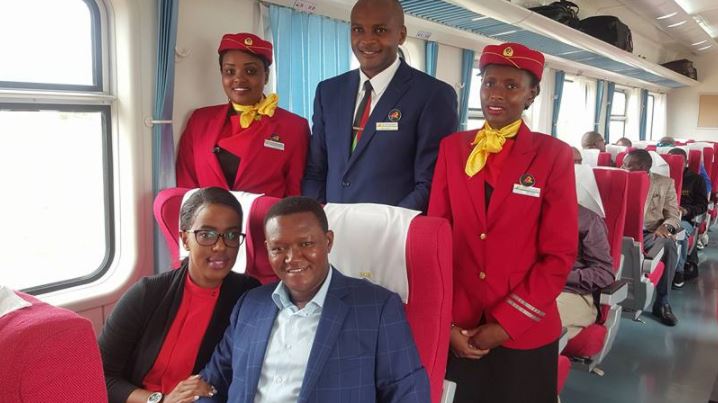 Machakos County Governor Dr. Alfred Mutua on Saturday took a trip on the Standard Gauge Railway from Nairobi to Mombasa.

Just like the many Kenyans who have taken to social media to shared their experiences of the train service, the governor shared his on Facebook describing the trip as magical.

MY MAGICAL TRIP ON THE SGR TRAIN FROM NAIROBI TO MOMBASA

Life is full of surprises and excitement. I felt like a child as I walked towards the SGR Nairobi Terminus at Syokimau for a trip to Mombasa on the new service. I was probably the first Governor to take the train to the coastal town and it reminded me of my days as “Msafiri.”

It was a cool Saturday morning of 10 June, 2017 and my blood was pumping full of excitement. I love train trips and the ability to travel from Nairobi to Mombasa in four hours in safety and comfort was exhilarating.

With my lovely Lillian to my side, I dragged our suitcase towards the entrance. The terminus building is captivating – high open spaces and looking like an international, modern airport terminal than a regular train station.

The station’s toilets are brand new, good, but in a mark of shame, had no water (despite the station being new). The ladies toilet had water spilt everywhere on the floor but the taps were dry and the stench was starting to build. I hope Gen. Kianga, Chairman of Kenya Railways and able CEO Atanas Maina will move with speed and have no mercy as they take care of this Third World mentality failure common in Africa.

After security check, we went up the escalator and were greeted by a crowd of passengers – thousands of travelers, also on the same trip. I had heard that this Madaraka Express was popular but I was amazed by how popular it is.

I scanned my ticket at the entry gates and they opened automatically and we walked through. Wow. Very efficient. Great use of light and signage declared that this was a modern day wonder.

We found our coach (or is it carriage?), settled and at 9 am sharp, the train rolled out of the station and we were on our way, together with thousands, to Mombasa.

The train journey was comfortable. The coaches are clean, have plugins for charging phones and clean toilets. Contemporary and popular music was piped down the 15 carriages. I bobbed my head to Lucky Dube, Sauti Sol and even shuffled my feet to Tekno’s Pana (which I happen to love).

The train’s movement was a surprise – very smooth and deceiving in terms of speed. I looked at the trees and grasslands pass slowly outside. You do not notice the speed unless you look down at the tracks. Signs on an LED display on each end of the couches indicated the speed – averaging 110 to 120 kilometers an hour. However, it felt as if we were only doing 40 kph. Well controlled air conditioning added to the comfort.

We chatted with some of the 29 crew members on the train. Irene Chebett from Eldoret told me how she spotted an employment advert in the newspapers last year and applied. Justus Mutunga Nzesa from Mwingi also saw the advert. All the crew members from their supervisors Stella Ndiwa and Kennedy Mugo to crew members Jeniffer Sambu and Brian Timothy Karmanga, all saw the newspaper adverts applied, were interviewed hired and trained. They all come from every corner of Kenya.

I took a walk down the coaches and chatted with fellow travelers. I got the notion that most were traveling down to Mombasa because now they could on the train. Some told me they had chosen to go down for the weekend so as to sample the train.

Family members, children, tourists and adventure seekers chatted, happy that what was once a dream was now a reality.

I noticed some travelers had carried their own snacks and drinks.

Fellow travelers cheered as they agreed with him. I made a mental note to inform the Kenya Railways CEO. There is a reason President Uhuru lowered the ticket prices to 700 shs. The train tickets and food sold on board should be of an affordable rate for the common mwananchi.

Outside, as we passed Tsavo National Park, elephants seemed to raise their heads and look at this iron snake as it sped from the highlands to the ocean.

We had a 10 minute stop at Mtito Andei to allow the Nairobi bound train to pass (It passed so fast that you only had time to say, “Is that the tra..?..”). Then, seeming to float in the air, we rolled into the magnificent Mombasa terminus at Miritini just after 1:30 pm.

And just like that, four and half hours after departing Nairobi, Lillian and I walked out of the Mombasa station proud that now Kenyans’ lives were being transformed by the SGR train service. It was a magical train trip and I encourage all to try it. I am now working on how to get the SGR service to Machakos.

As we say in Maendeleo Chap Chap, Inawezekana na Itawezekana. 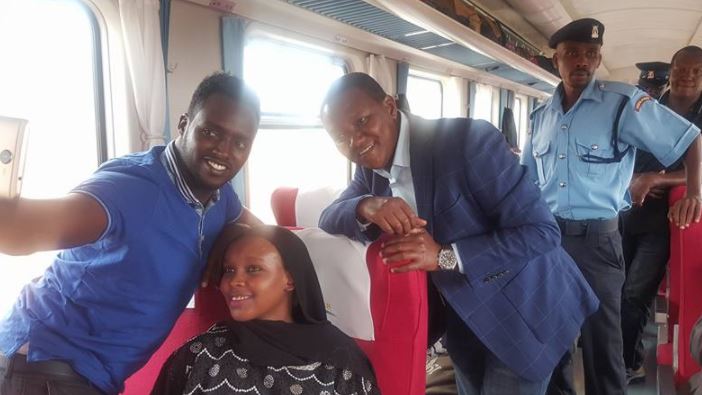 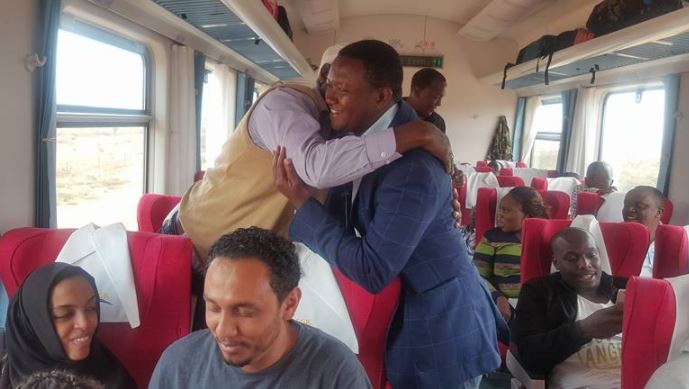 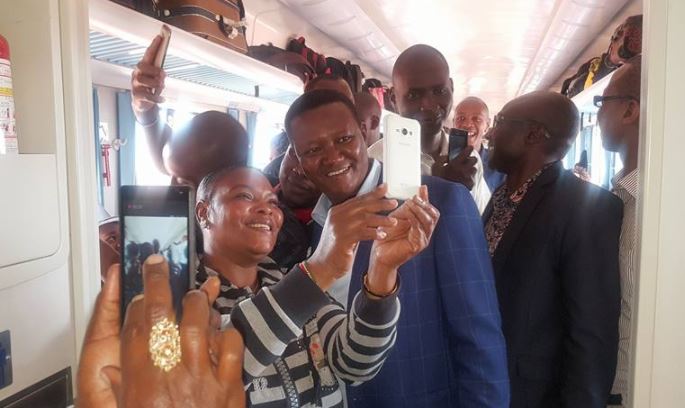 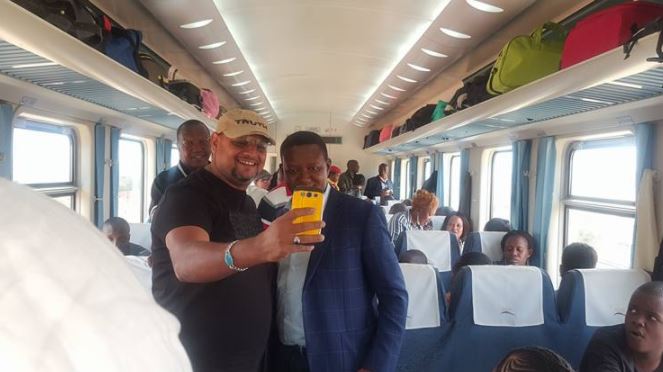 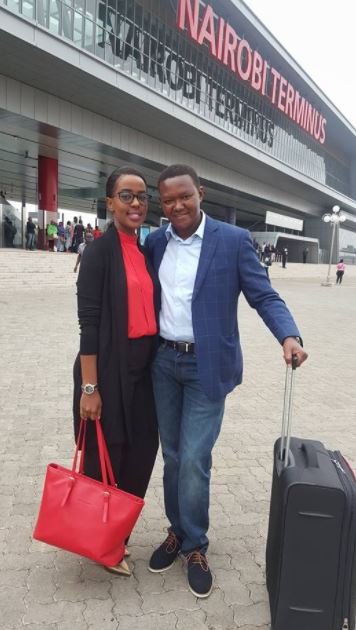 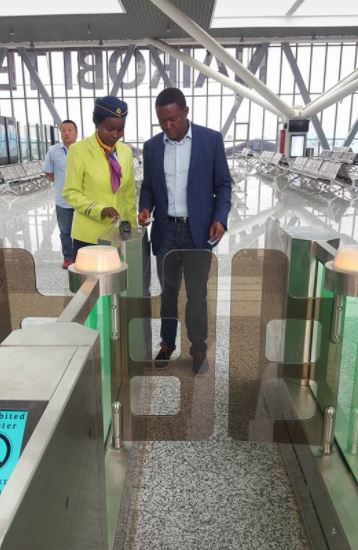 Boniface Mwangi Accuses ‘Cry Baby’ Jaguar of Defacing his Campaign Posters Across Starehe (Photos) < Previous
Cost of Fertilizer to Drop in Bid to Curb Food Shortage, Says Ruto Next >
Recommended stories you may like: