The problem with running a flashy campaign with eye-catchy texts and images and big dreams, is that it will all come back to haunt you if you fail to deliver.

Sometime back, images from Jubilee’s campaign manifesto showing what looked like a modern electric train, were revisited when the ancient-looking locomotives from China finally arrived.

Now yesterday, the person handling the President’s Twitter thought it wise to tweet a quote from the President about what seems like a broken campaign promise.

While receiving the Queens Baton for 2018 Commonwealth Games at KICC yesterday, Uhuru reiterated his government’s pledge to construct new stadiums across the country.

“I want us all to be perfectly clear on that matter: three major stadia will soon be constructed in Nairobi, Mombasa and Eldoret, in line with the manifesto promise that we made,” the President said.

Well, to be perfectly clear, Jubilee promised 5 not 3 new stadiums. 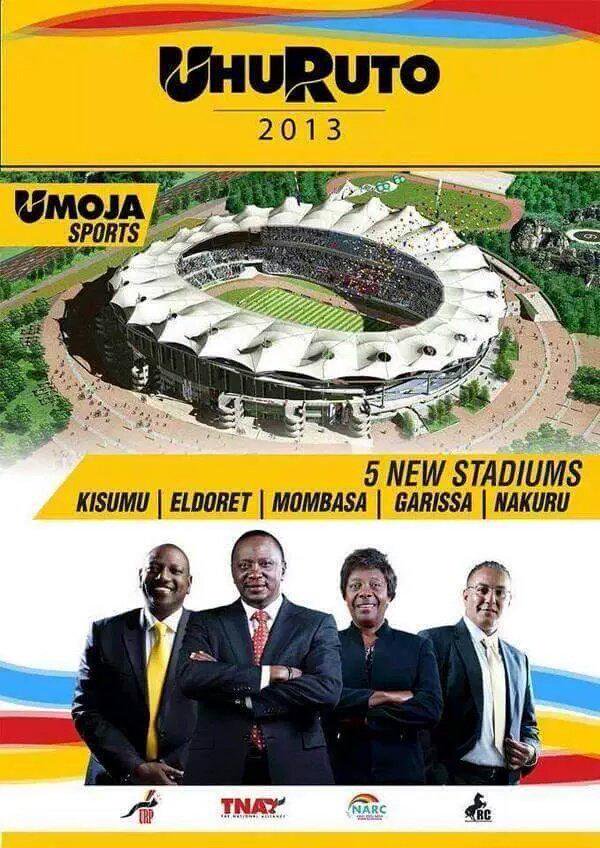 But this promise has been very elusive. I’m surprised Uhuru had the guts to bring it up.

Since the last election, there have been a few renovations in stadiums, but most of these have been conducted by county governments. We’re yet to see a single stadium constructed by the national government from the ground up.

As expected, KOT were quick to call out the president on this one.

Here’s are some tweets.

@UKenyatta Dude please, why do you have to lie every time?

@UKenyatta Oh! Lord where did we go wrong as country ?

@kwintah1 but this guy @UKenyatta is becoming a pathological liar!

@UKenyatta Define ‘soon’… Does the construction start before, during or after the general elections coz you can’t promise us the same thing twice.?

@UKenyatta I’m with you on this one. I too used to “seriously read” 3 days to exams na nilikua napita bado.

@UKenyatta The ‘mad man of Mobatha’ has built this at Uwanja wa Mbuzi and he never promised us pic.twitter.com/ViEOallPv5

@UKenyatta Next will be a millions jobs per year in 2 months pic.twitter.com/owZsm7fGcb

The Trending Pics in Nairobi This Furahiday < Previous
The Hottest Stories on the Internet Today (Monday April 10) Next >
Recommended stories you may like: