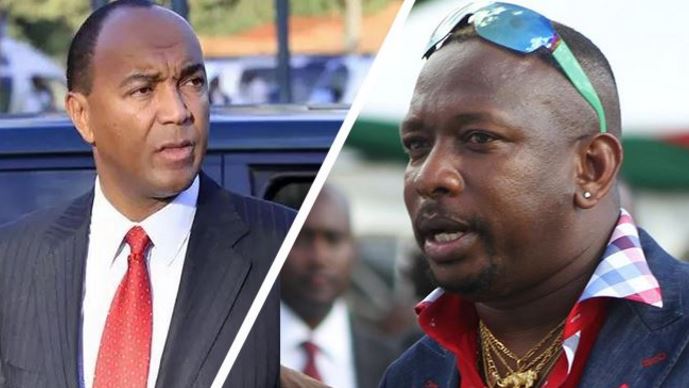 Nairobi senator Mike Sonko has dismissed reports that he is stepping down for Peter Kenneth in the Nairobi governor race.

On Wednesday, it was alleged on internet circles that the controversial senator was offered Sh 1 Billion by President Uhuru Kenyatta to step down for Peter Kenneth.

BREAKING NEWS!
Sonko steps down for PK after being offered 1 Billion by President Uhuru Kenyatta#SonkoStepsdownForPK

As a result of the unconfirmed reports, the hashtag #SonkoStepsDownfor PK was trending for the better part of yesterday as Kenyans on twitter reacted to the news.

@MikeSonko is expected to make announcements about his move to back up PK any moment from now. #SonkoStepsdownForPK

#SonkoStepsdownForPK That was the last pic of Sonko as an elected leader! pic.twitter.com/q9Qsb0LemY

Finally Mike Sonko has decided to step down for Peter Kenneth,Uthamaki must fall .#SonkoStepsdownForPK pic.twitter.com/KW22TlkWOp

In other words, the Uthamaki house has to be kept clean…… #SonkoStepsDownForPK

#SonkoStepsdownForPK Mike Sonko thought he could corner Jubilee. They have shut down his mouth Using Super Glue

#SonkoStepsdownForPK its now official, kidero is the governor for nairobi 2017-2022

However, Mike Sonko has termed the reports as propaganda, reiterating that he is not stepping down for anyone.

“Propaganda machinery at work. I’m not stepping down for anyone. Let the Great people of Nairobi decide,” wrote Sonko on Facebook.

The Trending Pics in Nairobi This Thursday < Previous
PHOTOS – Emotions Run High as Family and Friends Bid Farewell to Comedian Ayeiya Next >
Recommended stories you may like: