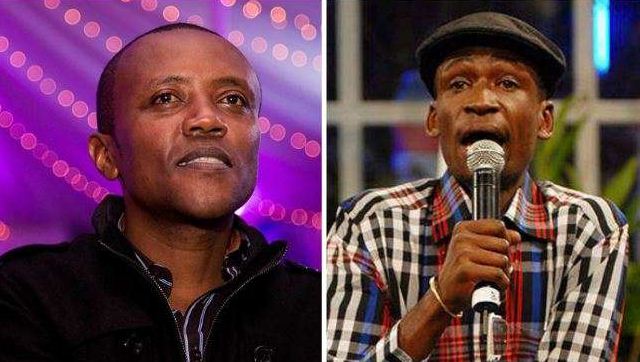 Churchill show comedian Emmanuel Makori aka Ayeiya passed away last Thursday in a grisly road accident along Magadi road, near the Catholic University of East Africa after the car he was in rammed into a post.

Ayeiya’s tragic death has been received with shock and sadness from all over the country, with President Uhuru Kenyatta being one of the high profile Kenyan personalities to mourn the late Ayeiya.

The latest person to eulogize the comedian is Maina Kageni who says he first met the comedian on reality show ‘Top Comic.’

“He enriched our lives for the longest time ever. The first time I met this guy was during top comic, and the moment he stepped on stage… let me tell you about comedy … comedy is the hardest thing ever. You know you can play a song, 20 times, but you can’t tell the same joke twice. And this guy was one of those people you could see he’s got a bright future.”

“He went through a beautiful part of his story from top comic to the Churchill Show then he went through a very bad spell and I wondered is he going to be okay? But he came back and he was bigger and better than ever’.

“To his family, you are in our thoughts and prayers. To Ayeiya, you know, you gave us such great moments, it’s impossible to forget you. What annoys me, though, is his age. When I see young people go at their prime. It just melts me. It’s my biggest regret. But we cannot argue with God’s will. So Ayeiya Poa Poa ‘kayamba kwako’.”

Ayeiya’s former employer Daniel Ndambuki aka Churchill also said: “Emmanuel Makori will rest this Friday. The good thing about Makori is that he received Jesus as his personal saviour. He was a team leader, very sober very intelligent, we are gonna miss you.”