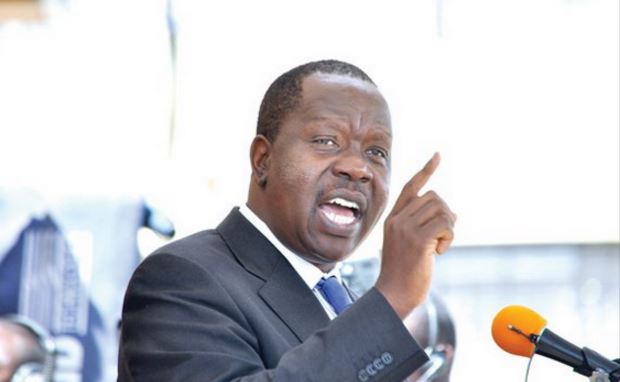 The Ministry of Edcation has begun vetting  academic credentials of aspirants seeking to contest in the August polls in a move to unmask those with fake certificates.

Speaking on Sunday, Education CS Fred Matiang’i said they intend to allow only the “right people” to ascend to leadership.

“I know politicians will not be happy with me on this but we will not retreat,” said Dr Matiang’i, adding that many of the evils bedeviling the country are a product of a system infiltrated by political leaders who cheated in their examinations.

“How do you vote and sit pretty at home believing that this person will do much for you during his tenure?” the CS asked.

Dr Matiang’i who was speaking in Masimba, Masaba South in Kisii County, also called for peaceful elections and urged those aspiring for political seats to preach peace because Kenya is bigger than the political elite.

The CS also warned against cheating in exams, saying the government is keen on eradicating the vice.

“Anybody, be either a teacher or a student, who believes there is going to be an easier path out during the national examinations should forget it,” said Dr Matiang’i. “We are committed to ensuring this vice is eradicated.”