Sh100 Wedding Groom Speaks Up on Overwhelming Turn of Events, Reveals Plans for a Second Honeymoon 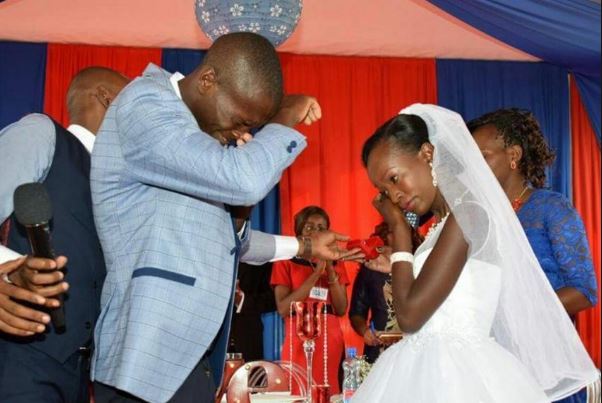 After their Sh 3.5 Million wedding ceremony on Valentine’s Day, Mr and Mrs Mutura are not yet done with the fun fair.

The couple has so far been treated to a hair makeover, a honeymoon in Diani, a Sh1 Million piece of land in Kajiado and the recent extravagant wedding that left the Mr Mutura in tears.

Speaking to eDaily, Mr Mutura spoke about the overwhelming support that has come their way after he spent Sh 100 on a wedding on Sunday, January 22 at Community Christian Worship Centre in Kasarani, Nairobi.

“I don’t know how to explain the feeling. It was just too good! I had not experienced such a feeling and I will always remember it for the rest of my life,” he said.

“I shed tears because when something happens in your life; something completely new to you; something that looks like a dream but it is indeed a reality, you can’t help it. I remembered how I slipped a KSh50 ring on my wife’s finger before, and there I was – slipping an expensive gold ring on her finger, I subconsciously found tears rolling down my cheeks. I could not believe it.”

“I had dreamt of holding a big wedding, but due to my financial situation, I could not. And out of nowhere, I was at the centre of one of the most lavish reception ceremonies in the country. I felt loved by my sponsors. A huge number of people came to our Valentine’s Day ceremony; I felt raw, excessive love,” said Mr Mutura.

Mr Mutura revealed that plans have been made for a second honeymoon to Dubai.

“My wife and I are yet to go on honeymoon to Dubai. I understand the plans by our sponsors to fly us out of the country are underway. I am yet to be informed on progress of the plans, though I heard everything has already been paid for,” he said.

“The ceremony my wife and I had on February 14 was not a wedding per se, it was a day to celebrate our love, given we could not afford a hefty event back then. We danced, ate a cake and made merry. Suggestion by sections that the sponsors could have given my wife and I the money (KSh3.5 million) used to organise the event is valid, at least according to them. But again the sponsors organised the ceremony and we appreciate the opportunity,” Mr Mutura said.

Wilson Mutura, a fruit vendor in Kasarani, Nairobi, said that another well wisher has promised to put up a business for the couple.

“About a land in Kajiado that we were promised, yes, the well-wishers contacted me before our Valentine’s Day ceremony and told me that we will sign ownership transfer documents on Friday, February 17. Besides that, I am unaware of any new arrangement. Another well-wisher said they’ll put up a business for us, but I am yet to follow up with them. They are yet to contact me.”

Mr Mutura also showered praise on his wife and noted what it takes to have a happy maariage.

“I feel lucky to have Ann because she has stood by me for three years now despite my financial situation. We did not rush into this marriage. Divorce cases nowadays are rampant – and I have seen how messy they can get. So, Ann and I took our time before committing. My KSh100 wedding has taught me that the ceremony is not all about money but intention.

For a marriage to be complete, it is not all about money. A wedding ceremony is not marriage; marriage is love, understanding and perseverance. If Ann was after money, then she would not have accepted to be married by me,” said Mutura, adding: “Marriage is understanding the purpose of each party in the union.”