Kalonzo Musyoka: I Will Not Bolt from NASA 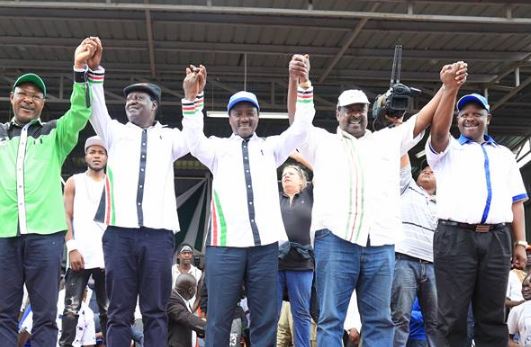 Wiper leader Kalonzo Musyoka has denied reports that he plans to go it alone in August General Election.

The CORD co-principal was responding to reports by observers who do not think Kalonzo will clinch the NASA or CORD presidential ticket.

One of the observers, political analyst Mutahi Ngunyi is convinced Kalonzo will bolt from the grand coalition and run on a Wiper ticket.

”Kalonzo will bolt out of NASA in my view. The issue is not if he will but when he will. And like Raila, he will do so to recreate the 2007 magic. In that election, he ran as president, lost and got awarded the job of Vice President. His gamble paid off and if it worked then, why not repeat it this year?” stated Mutahi.

But Kalonzo, while addressing the media in Kisii Tuesday morning, blamed the false reports on Jubilee agents who want to create uncertainty in the NASA camp.

“Nobody will stop me from seeking the flag-bearer seat. I have no apologies to make for saying that I will seek the Nasa presidential ticket. Please let us remain focused,” said Kalonzo.

He explained that he would not have attended the first meeting of Nasa leaders in Bomet county at the weekend had he been making his own plans.

“I attended the first major event in Bomet. If I had intentions of wanting to run separately I would not have gone to the event. Some of the people propagating this lie may be agents who want to cause suspicion,” he said.

Hilarious Meme Compilation (Wednesday February 8) < Previous
All The Trending Images This Wednesday Next >
Recommended stories you may like: