Ann Mutura: Why I Rejected Advances from Rich Men to Marry Husband in Sh100 Wedding 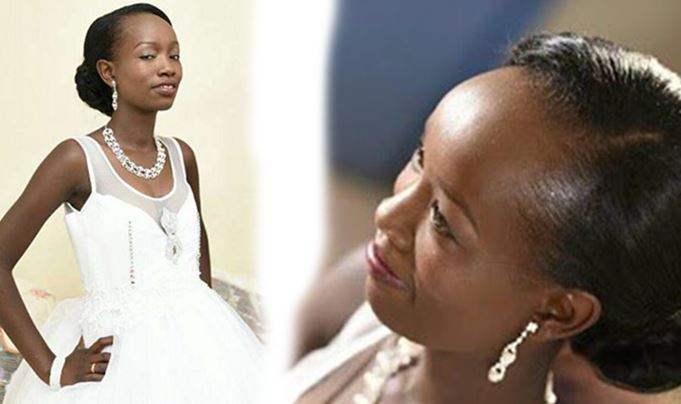 Mr and Mrs Mutura are the darling of Kenya after their humble wedding in Kasarani that cost them Sh 100 to buy two rings.

Ann Mutura, 23, the wife of Wilson Mutura, 27, has made a startling revelation about being approached by rich men and turning them down for Mr Mutura.

According to the soft-spoken bride, she agreed to wed her now-husband in a KSh100 ceremony late last month because she is “sure of a peaceful union” with him.

“Financially stable men approached me, but I rebuffed their advances. You know what? There are some men who have goods, property, and money in abundance, but are arrogant and controlling. I thought to myself: if I gave in to their advances, I would never have peace. But with Wilson, I was sure of experiencing near-lifetime peace,” Ann told eDaily.

She added that no amount of money can lure her to go against her primcipals.

“Everyone has his own principles, everyone makes his own decisions. If you are firm in your decisions, then there’s no one or anything that can sway you, especially if you are serious with what you believe in,” she said, adding: “With me, no amount of money can lure me. It is very hard to make me pull out of a decision.”

She advises the youth, especially young women, to be weary of rich men out to use and dump them.

“There are those men and women who will lure you with money, a tidy sum of money, but if you evaluate their intentions keenly, you’d realise they are motivated to use and dump you. But again, there are women who are out to milk these men dry, and once the coffers are drained, they disappear. So, to me, love is paramount. ‘Money-motivated love’ will never beat true love,” said Ann Mutura.

“The man or woman who approaches you could be financially loaded – and has everything working for him or her, but again you wouldn’t know how much of a struggle he or she went through to get that wealth; you wouldn’t know what he did to acquire the riches.

“I would love to advice young people, especially my fellow women, to be patient with their partners who are yet to have a financial breakthrough. If you find out he has tried the best he can to own that which he owns, then the best move you can make is to join him and work in cooperation toward creating more wealth together. But above all, God should come first in your relationship; there shouldn’t be a compromise on that,” she concluded.
After the couple’s grand wedding on Valentine’s Day, the couple are set for another all expense paid honeymoon to Dubai by Bonfire Adventures.
Kubamba TV Show Host DJ Moz Expecting Third Child with Wife Deborah (Pic) < Previous
Jicho Pevu’s Moha: Kama Unampenda Uhuru Kenyatta… Next >
Recommended stories you may like: