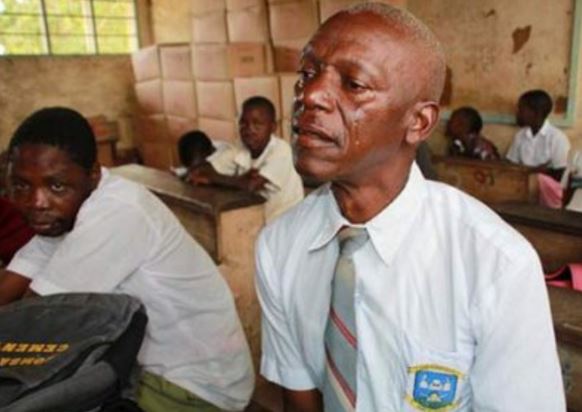 Kazungu Humadi Kadenge, 74,  on Wednesday reported at Ganze Boys Secondary School where he was enrolled in Form One.

Mr Kadenge from Kimbule village, Ganze Constituency in  Kilifi County opted to go back to class to escape being branded a sorcerer and to liberate himself from being looked down upon for being illiterate, the Standard reports.

The father of seven scored 134 marks in last year’s Kenya Certificate of Primary Education (KCPE) at Ganze Primary School. He is determined to combat the stigma of illiteracy in a community where illiterate and poor people who cannot read the Bible are often associated with witchcraft.

Having dropped out of school in Standard Four about 50 years ago, Kadenge joined Ganze Primary School last year in Standard Three with special permission from the national government.

He was allowed to register for KCPE exams after proving to his teachers that he possessed basic literacy skills.

Kadenge had earlier escaped death narrowly on suspicion of being a sorcerer. His elder brother, however, was not lucky and was lynched by area residents.

Mr Kadenge is now schoolmates with two of his sons – one in Form Four and another in Form Two – after he refused an offer to join a school in Taita County.

In the future, the Form Onestudent wants to be the chairperson of the Ethics and Anti-Corruption Commission to fight corruption, which he said had plagued the country.

Ruth Odinga’s Home in Kisumu Broken Into < Previous
Another One! Graduate with Masters Spotted Seeking Job with Placard (Pic) Next >
Recommended stories you may like: