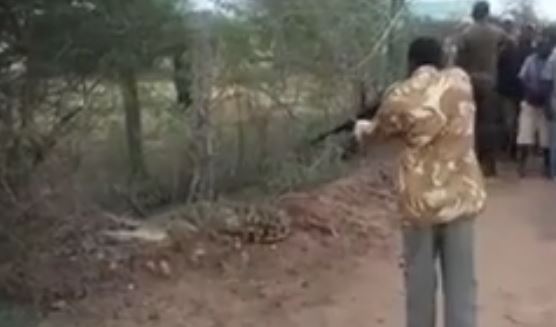 The Kenya Wildlife Service has been put on the spot once again over the manner in which they handle stray wild animals which they are mandated to conserve and protect.

This follows the release of a video on social media showing two men said to be Kenya Wildlife Service rangers shooting dead a stray crocodile.

According to Facebook group, Mombasa County Government Watch, the reptile was found outside the National Drought Management Authority in Hola Tana River County.

The video shows the officers shoot the crocodile twice as a gathered crowd cheers them on.

The Kenya Wildlife Service said investigations were underway at the time of publishing.

KWS has received reports of a Crocodile killed by a ranger in Tana County.We are investigating the matter and will be issuing a report ASAP

All The Trending Images This Wednesday < Previous
This Simple Voter Registration Mathematics Paints a Grim Picture for Raila in 2017 Next >
Recommended stories you may like: