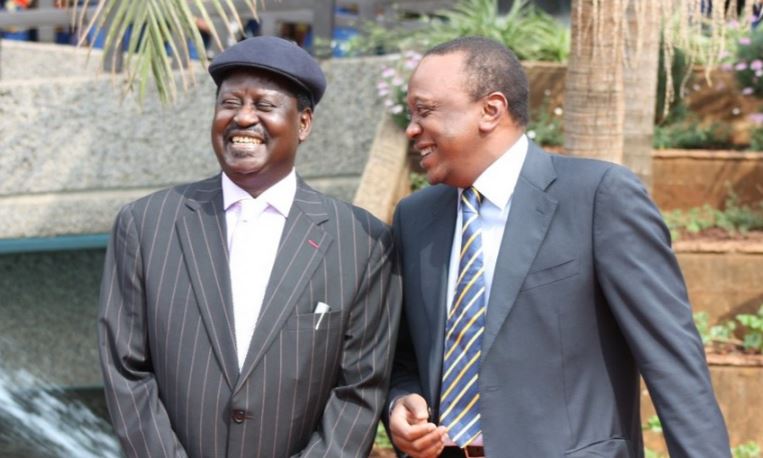 Over the weekend, Mutahi Ngunyi made a comeback by announcing that ‘tyranny of numbers’ is dead. He said that what worked in 2013 will not work in 2017, and Jubilee will likely need another tribe to lock their victory.

He wrote that Kenya will end up having a Prime Minister, most likely Raila who will be the ‘forced’ PM after the nation erupts. As expected, many people disagreed with this hypothesis.

As the second phase of voter registration kicks off next week, this is how the IEBC numbers look like.

Depending on how Raila plays his ball, he may end up taking Western in its entirety or lose about 20% to either Mudavadi or Wetangula. Eastern is also another dangerous ground for Raila. If he loses the Kamba vote, the election will be over in the morning. The former Prime Minister has a huge task ahead of convincing Kalonzo to deputize him again. It will not sit well with Kalonzo, and it sure as day will not sit well with Mudavadi. But assuming he manages to retain the Kamba vote, there’s still the other half of Eastern made up of Meru and Embu that goes to Uhuru.

It is the same story in Nairobi. Uhuru and Raila will split the vote.

Which leaves the Rift Valley, the most important block for both candidates. The opposition leader is starting from behind.

Both Uhuru and Raila have been very keen on these two counties in the last 4 years. In Narok, Uhuru tried to court the late Ole Ntimama, but Raila was not willing to let go, publicly stating that he died ‘with the ODM flag’.

In Kajiado, Uhuru ‘poached’ Joseph Nkaissery to the interior secretary. It’s quite likely that these moves were guided by the 2013 numbers, with Jubilee out to tame Raila in the only two populous counties he did well in the Rift Valley.

We will have to wait till August to find out whether this strategy worked.

In Nakuru county Raila managed 105,000, but Uhuru was just a few thousands shy of half a million.

Many Cord supporters believe that Raila has big chance of pulling an upset in the Rift Valley, particularly the counties he did not do well in 2013, but if you are to pause for a moment and examine how our politics are stitched up, you can conclude that this will be very unlikely, unless he offers Rift Valley a similar position as what Jubilee is offering, in this case the Deputy Presidency. I foresee a situation where many of the dissenting voices will struggle to retain their seats.

Now, based on the current voter registration numbers, it doesn’t look good for Raila.

We give the Cord leader all of Nyanza, Coast and Western, and half of Eastern, North Eastern and Nairobi.

Uhuru gets all of Central and Rift Valley, half of Eastern, North Eastern and Nairobi. This is how the it ends up looking. 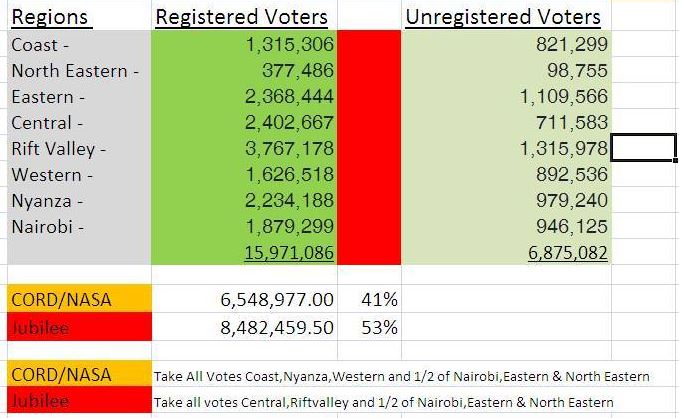 Obviously Rift Valley is controversial, but for Raila to stand any chance, he will need to do better than he did in 2013. The ‘unregistered’ column shows the pool of Kenyans IEBC will be seeking to register in the next round.

We will have a clearer picture once the exercise is complete.

Eventually what will matter is the turn out. Who between Raila and Uhuru will generate more excitement among their supporters?

However much Jubilee may have disappointed people, the biggest mistake any pundit or observer can make is to assume that Kenyans vote rationally. The percentage of Kenyans who use their brains when casting their ballots is in single digits. Like clockwork, we all seek refuge in our tribal cocoons every 5 years.