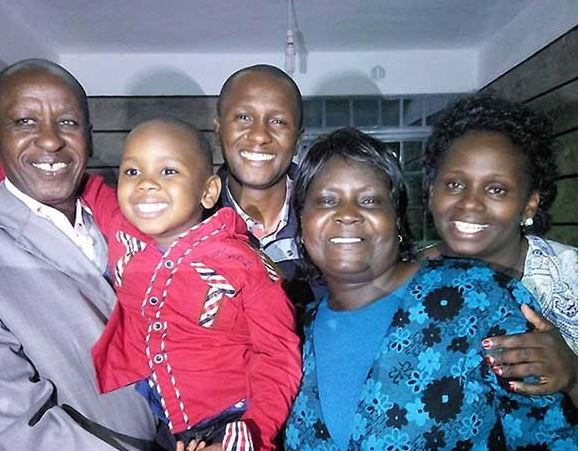 Police on Tuesday evening successfully rescued four-year-old Kelson Kimani who was kidnapped from his Thika Home on Friday.

The boy was rescued in Kasarani area and three suspects arrested as they moved the boy from Ruaka to Mwiki.

According to Head of Flying Squad from Mr Saidi Kiprotich, the gang was relocating the minor to a safer house after discovering their initial hideout had been compromised.

“They had been hiding the boy in a house in Ruaka and they were intercepted as they moved him to Mwiki. The boy is in good health but he has to be checked by doctors,” said Kiprotich.

On Monday, police detained four more suspects in connection with the kidnapping.

The four include a next door neighbor of Kelson Kimani’s family and a woman who opened the gate allowing the gunmen to enter the compound.

Police suspect the gunmen could be operating as a syndicate.

On Friday, at around 6:30 pm four gunmen raided Kimani’s home in Thika’s section 9 area where they stole a huge amount of money believed to be the proceeds of the family day’s business sales before kidnapping him.

The kidnappers were demanding Sh2.2 Million to release Kelson.

Pokot Herdsmen Raid Laikipia Conservancy in Search of Pasture, Kill Wild Animals (PICS) < Previous
Chris Kirubi Reveals 4 Hour Sleep Habit, But The Reply He Got May Force Him To Reconsider Next >
Recommended stories you may like: