An interesting obituary published in a local daily is the talk of the town for its humorous message.

The death announcement of veteran golfer Charles Farrar was published in the Daily Nation on Wednesday. Unlike most obituaries, Farrar’s was a sharp contrast in which humor was incorporated proving that it’s not all gloom even in death.

The obituary reads: “David, Justin, James, Jenny and Jessica are very sad to announce the death of Charles on Monday after a long illness borne with typical fortitude and humor.”

Acknowledging Charles’ love for golf, the obituary further states: “Charles and his beloved Pat will now be creating their usual mischief and mayhem at the ultimate Nineteenth hole.”

He succumbed to liver failure after a six-month battle at the M.P Shah hospital.

He was the man behind the Golf Talent Foundation and Junior Golf Foundation that have produced some of Kenya’s finest golfers. 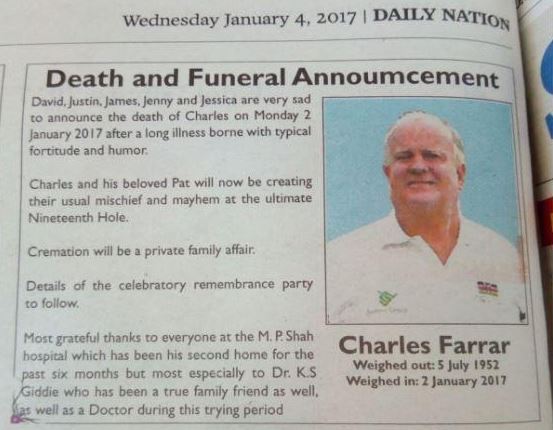 Hilarious Meme Compilation (Thursday January 5) < Previous
All Trending Images This Thursday Next >
Recommended stories you may like: