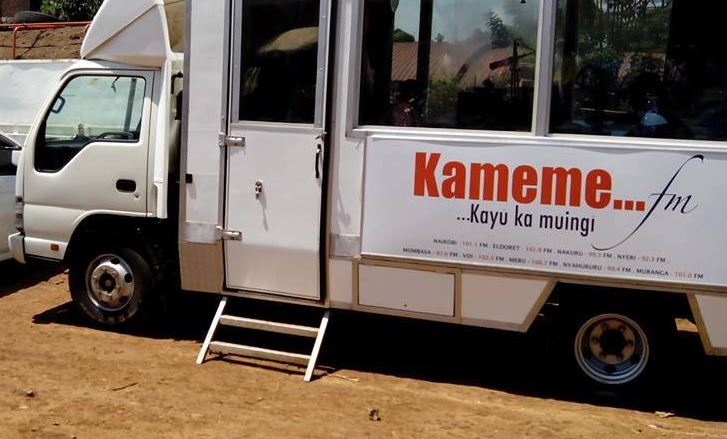 Jubilee has been running a series of ads on vernacular radio stations in a bid to mobilize Kenyans from their strongholds to register as voters.

The propaganda pieces can be interpreted in many ways, but many Kenyans agree they are not helping to heal the nation.

Take for instance this one that has been running on Kameme Fm, owned by the Kenyatta family. It cleverly uses at least 2 psychologically proven tricks to manipulate: Fear and pride. To seal the deal, religion is also thrown around.

In the commercial, the narrator tells his audience of the untold ‘calamities’ that would befall them if Jubilee were to lose to Cord. He says that the business environment would be completely shattered if Uhuru lost the election.

The narrator also mentions two Bible verses, twisted to fit into the narrative he is selling. Obviously majority of those listening to vernacular broadcasts are super religious.

He then concludes by telling the listeners that failure to leave business places to go register as a voter, and vote, would not leave them any richer or poorer. He states that they’ve had 5 years of an Uhuru presidency to better their lives, and 2 days will not make a difference.

This audio clip has been making a lot of noise on social media. People are already drawing comparisons to what was happening in 2007 just before the elections.

While mobilizing people to register as voters is not a bad thing, the message passed along in this ad can be likened to that of preparation of war.

Listen to the clip. The English translation is just below. It’s not perfect.

Our people!! What is ahead of us is very bad and hot.

If we joke, our house will witness bad things (Insert a kikuyu proverb).

In other areas, people are not buying or selling anything without displaying their ID and voters card. Yet here (in central), we are just reluctant. You cannot leave your business to go pick your voters card. (Insert sarcasm).

[After the election] You will not even have a place to conduct that business.

In this country we always want a good business environment, freedom to worship, having freedom of movement; but if we fail to cast our votes, and re-elect Uhuru and Ruto, I can tell without a shadow of a doubt, we will sing Psalms 137, which says, “By the rivers of Babylon we sat and wept, when we remembered Zion.”

If you are 18 years and above from Central province and you’ve not picked up your ID and voters card, you are an enemy of the state; similar to a gun without bullets or a lion without teeth.

Be informed that this time round, we want to have a decisive victory, because last time we had a ‘narrow escape’.

Let us stop being last-minute people. Saying that you can’t briefly leave your business to register as a voter, or vote,

Let me tell you frankly ‘ndugu na dada yangu’, you will look for a business to report to and fail to find any.

This period that has been provided by the government, let us wake up as a house and fight for our independence, which we can only accomplish by voting. Because even Proverbs 18:18 says, “Casting lots causes contentions to cease, And keeps the mighty apart.” (NKJV)

Translated to “voting removes all doubt. Separating two people who are fighting (Cord and Jubilee)”

If the Bible says so, who are you to remain in your business, refuse to go queue and vote, refuse to leave your job yet you are not getting paid.. (Insert sarcasm).

If you’ve not gotten richer in those 5 years Uhuru has been president, do you think you will get richer or poorer in those 2 days?

Let’s wake up early and pick up our voters card.