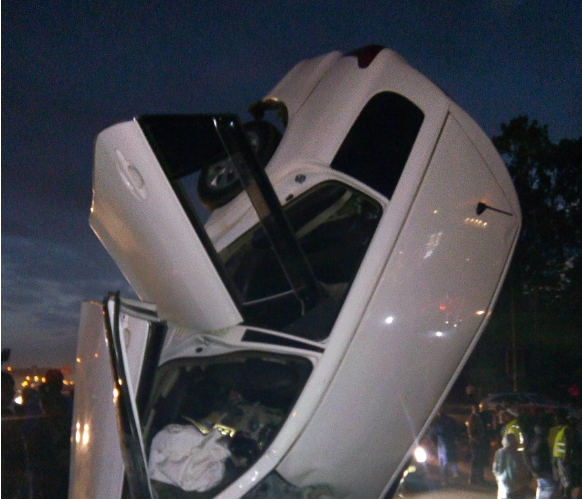 Last week Thursday, a freak accident happened at Roysambu Flyover.
The car alleged to have been speeding hit one of the guards at the Roysambu overpass resulting in the car being suspended in an upright position.
A social media user who was at the scene of the accident took to Facebook later that night to narrate what he saw.
Tosh Ruchiami wrote,
A Story To Tell
“So tonight I have found myself in the middle of an incident that I will remember for ages. Main thing I’ve taken away from tonight is that I’ve seen two sides of Kenyans.
The Good Side
I am driving home at around seven pm. Normally I usually take the underpass after the Roysambu bridge but having given a Zetech University student a lift, I decide to take the overpass instead so as to drop him at Garden City rather than drop him at the Roysambu stage. Just as I join the overpass I hear a loud crash and screeching of metal. I see traffic slowing down ahead of me and as i approach the stopping cars i see a white Toyota Fielder vertically impaled on the barrier on the other side of the road. It looks bizarre. Never seen anything like it in my life. Worse still the car has caught fire.
I slow down and take out my phone to start taking video. Many Kenyans rush to the scene, ahead of me some people park their cars and rush to the scene. The car is on fire and the driver is unconscious and trapped within. I stop filming, i alight the car to see if i can help. I was amazed how guys in mere seconds coordinated to scoop handfuls of sand nearby to put out the fire as others joined hands to break in the drivers window and pull the door open. Within minutes the fire was off and people helped each other to pull out the driver out of the drivers seat. Unconscious, lifeless and bleeding from the head and a torn lip; the driver is lucky to be alive n breathing.
I had stopped my car near the scene so they carry the guy towards my general direction. “Tusaidie, tusaidie!” “Apelekwe Kenyatta!” “Guru Nanak” “Hapana Neema” There is a bit of confusion but the crowd wants the man to be helped. I oblige quickly. I say twende Neema. He is put in my back seat and 3 others come along together with my friend the Zetech student. Its a tight fit at the back of my Mitsubishi Colt but we squeeze in and take off. We drive fast towards Neema Hospital, police and passers by help stop traffic as i take the wrong side to get to Neema faster. Every minute counts.
I made it there very quickly and drive straight to Emergency. We quickly alight, one guy runs in and alerts the nurses of the situation and we are given a stretcher. We roll him in and he starts to receive first aid. He was unresponsive and badly hurt but he starts mumbling trying to talk. Looks like theres hope but he cant communicate. We search his pockets, no phone, no wallet, just keys. They need to know who this guy is, we offer to go back to the scene to look for identification. Ambulence is not available but luckily shows up. The Doctor takes my number and releases us. The driver needs to be taken to Kenyatta because Neema cant handle the injuries. We go back to the scene through wrong side again. We find the car gone, quickly we go to Kasarani Police. We arrive there before the car. We find a work ID n his phone, its still on. Cop searches for wife’s number and assures me he will take it from there. Nothing more I can do. I head home. I pray the guy will be well. He looked like he would recover.
The Bad Side
The guy in front of me and a few others had stopped to take pictures and video of the accident. Immediately the guy was pulled out of the car some of the guys jumped into their cars and left the scene as fast as the cockroaches in my kitchen when i switch on the lights at night.
I notably remember thinking the guy in front of me has a Probox, ample room to help this dude to hospital. Guys actually carried the injured guy towards him and he jumped into his car and sped off. I was really disappointed seeing that after the solidarity I had just witnessed. I’m thinking; “You’re a driver as well, next time it could be you, what if everyone drives off and you don’t make it to hospital in time.”
Human life is fragile but humanity can preserve it. I salute everyone who selflessly offered themselves to help a fellow human being at such a dire moment. I’m humbled by the solidarity and comradory I witnessed.
Anyway so ends my eventful night and I really pray the guy fully recovers. I wish Kenyans could come together like that to help each other more often and in other situations. Maybe we could unite like that to vote out corrupt leaders or stand against social injustices.”